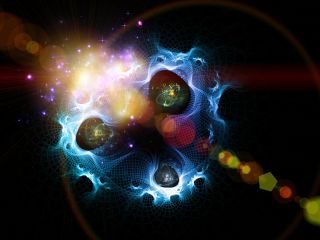 The bizarre rules of quantum mechanics may in fact enable many of life's fundamental processes, scientists say.
(Image: © agsandrew | Shutterstock)

NEW YORK — The bizarre rules of quantum physics are often thought to be restricted to the microworld, but scientists now suspect they may play an important role in the biology of life.

Evidence is growing for the involvement of quantum mechanics in a wide range of biological processes, including photosynthesis, bird migration, the sense of smell, and possibly even the origin of life.

These and other mysteries were the topic of a panel lecture June 1 held here at the Kaye Playhouse at Hunter College, part of the fifth annual World Science Festival.

Quantum mechanics refers to the strange set of rules that governs the behavior of subatomic particles, which can travel through walls, behave like waves and stay connected over vast distances. [Stunning Photos of the Very Small]

These oddities generally don't affect everyday macroscopic objects, which are thought to be too hot and wet for delicate quantum states to withstand. But it seems nature may have found ways to harness quantum mechanics to power some of its most complex and vital systems.

"Life is made out of atoms and atoms behave quantum mechanically," said cosmologist Paul Davies of Arizona State University. "Life has been around for a long time — 3.5 billion years on this planet at least — and there's plenty of time to learn some quantum trickery if it confers an advantage."

One area where clues are implicating quantum mechanics is the internal compasses of birds and other migratory animals. Many bird species migrate thousands of miles every year to return not just to the same region, but to the exact same breeding spot.

For ages, scientists have puzzled how birds could achieve such a feat of navigation, assuming they possess some ability to sense direction based on Earth's magnetic field.

"We see clearly they can detect the magnetic field," said University of California, Irvine, biophysicist Thorsten Ritz. "What we cannot do is say, 'This is the magnetic organ.'"

Mounting evidence now suggests birds may be relying on quantum entanglement — the strange ability of particles to share properties even when separated, so that if an action is performed on one, the other feels its consequences.

Scientists think the process is made possible by a protein inside birds' eye cells called cryptochrome.

"It's certainly very plausible," Lloyd said. "It sounded kind of crazy when I first heard it. We don't have direct experimental evidence, but it does make sense."

The theory gained support from a recent experiment with fruit flies, which also contain cryptochrome. When this light-detecting protein was extracted from the fruit flies, they lost their magnetic sensitivity and became discombobulated.

Another case where quantum mechanics may come to the rescue is the sense of smell. At first, biologists thought they understood smell through a simple model: Odor molecules waft into the nose, and receptor molecules there bind to these molecules and identify them based on their particular shape.

But scientists realized that some odor molecules that have identical shapes have completely different smells, due to a minute chemical change, such as a single hydrogen atom in the molecule being replaced by a heavier version of hydrogen called deuterium. While this affects the weight of the molecule, it doesn't change its shape, so it still fits into the receptor molecule in exactly the same way.

How, then, can olfactory systems sense the difference? The answer may lie in quantum particles' ability to act like waves.

"The theory is that even if the shape of the molecule is the same, because it's got this slight difference, it vibrates in a different fashion," Lloyd said. "And this kind of wavelike nature, which is a purely quantum kind of effect, somehow this receptor is able to sense this vibrational difference."

Physicists are probing more and more unsolved mysteries of biology, hoping that quantum mechanics may provide the missing piece of the puzzle. They even have hope that it could shed light on one of the most intractable questions in all of biology: How did life get started? [7 Theories on the Origin of Life]

"We want to know 'How did non-life turn into life?'" Davies said. "Life is clearly a distinctive state of matter. What we would like to know is if that distinctiveness is fundamentally quantum mechanical."

But in their excitement to try the quantum key in the locks of biology, some scientists are wary of overreaching.