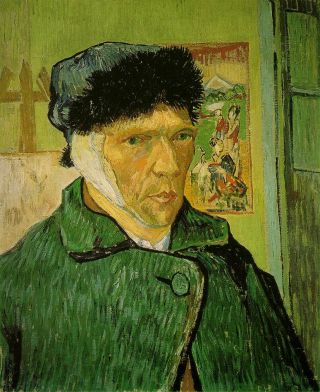 Vincent van Gogh's "Self-portrait with bandaged ear," painted in 1889, shortly after he cut his own ear off.
(Image: © Public domain)

Many of history's most celebrated creative geniuses were mentally ill, from renowned artists Vincent van Gogh and Frida Kahlo to literary giants Virginia Woolf and Edgar Allan Poe. Today, the fabled connection between genius and madness is no longer merely anecdotal. Mounting research shows these two extremes of the human mind really are linked — and scientists are beginning to understand why.

A panel of experts discussed recent and ongoing research on the subject at an event held Thursday (May 31) in New York as part of the 5th annual World Science Festival. All three panelists suffer from mental illnesses themselves.

Kay Redfield Jamison, a clinical psychologist and professor at Johns Hopkins University School of Medicine, said the findings of some 20 or 30 scientific studies endorse the notion of the "tortured genius." Of the many varieties of psychosis, creativity appears to be most strongly linked to mood disorders, and especially bipolar disorder, which Jamison suffers from herself. For example, one study tested the intelligence of 700,000 Swedish 16-year-olds and then followed up a decade later to learn which of them had developed mental illnesses. The startling results were published in 2010. "They found that people who excelled when they were 16 years old were four times as likely to go on to develop bipolar disorder," she said.

Bipolar disorder entails dramatic mood swings between extreme happiness (known as "mania") and severe depression. How might this brutal cycle engender creativity? Research by another panelist, James Fallon, a neurobiologist at the University of California-Irvine, suggests an answer.

"People with bipolar tend to be creative when they're coming out of deep depression," Fallon said. When a bipolar patient's mood improves, his brain activity shifts, too: activity dies down in the lower part of a brain region called the frontal lobe, and flares up in a higher part of that lobe. Amazingly, the very same shift happens when people have bouts of creativity. "There [is] this nexus between these circuits that have to do with bipolar and creativity," Fallon said. [Why We Zone Out]

As for how the brain patterns translate into conscious thought, Elyn Saks, a mental health law professor at the University of Southern California, explained that people with psychosis don't filter stimuli as well as other people. Instead, they're able to entertain contradictory ideas simultaneously, and become aware of loose associations that most people's unconscious brains wouldn't consider worthy of sending to the surface of our consciousness. While the invasion of nonsense into conscious thought can be overwhelming and disruptive, "it can be quite creative, too," said Saks, who developed schizophrenia as a young adult.

For example, word association studies, which ask participants to list all the words that come to mind in relation to a stimulus word (such as "tulip"), demonstrate that bipolar patients undergoing mild mania can generate three times as many word associations in a given time period as the general population. As for how this leads to strokes of genius, it could be that the sheer bounty of unsuppressed ideas means a greater probability of producing something profound.

Of course, no one is bursting with creative energy during a severe bout of depression or schizophrenia. Above all, these conditions are debilitating and even life-threatening, the scientists said, and although society benefits from the productivity of its tortured geniuses, those individuals don't always consider their moments of brilliance to be worth the extensive suffering. [The Freakiest Medical Conditions]

Saks put it this way: "I think the creativity is just one part of something that is mostly bad."