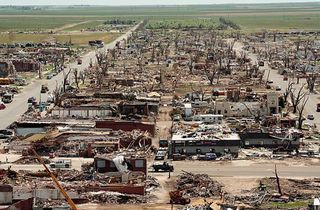 After 2011, one of the deadliest tornado years on record, 2012 is setting some tornado records worth celebrating: For the first time in seven years, tornadoes didn't kill a single person in the month of May.

The month is typically a prime time for deadly twisters; the last time the month passed without a single tornado fatality was in 2005, according to numbers from the National Oceanic and Atmospheric Administration.

The cheery figures reflect the remarkably low number of tornadoes that struck in May 2012, said Harold Brooks, a research meteorologist at NOAA's National Severe Storms Laboratory in Norman, Okla.

"At the moment, it appears that this May had the lowest number of tornadoes since the time relatively good records began, in 1954," Brooks told OurAmazingPlanet.

The preliminary count for May tornadoes is 122, an already low number that will likely drop as researchers winnow out duplicate tornado sightings. [Infographic: Tornado! How, When & Where Twisters Form]

"On average, we would probably expect to see close to 300 tornadoes during the month, give or take," Brooks said.

The quiet May weather belies a tornado season that started off with a bang: An above-average number of twisters churned across the United States in the early months of 2012. Yet a lack of wind shear — essentially an atmospheric layer cake of strong, contrasting wind speeds, and a key ingredient for tornadoes — has kept severe weather at bay.

"We've had plenty of instability and moisture — two of the ingredients we look for — but the organization for the storms that comes from wind shear just hasn't been there," Brooks said.

For ideal tornado conditions, he said, you'd expect to see a lot of wind shear in the first few thousand feet above the ground.

He contrasted the current conditions with last year's wild tornado season. In April 2011, 758 tornadoes churned across the United States. The big difference between now and then? Abundant wind shear, Brooks said.

In addition to the lack of wind shear, the jet stream, an atmospheric fence that divides cold, dry northern air from warm, moist southern air, has played a role in this spring's tornado lull, said Jake Crouch, a climatologist with the National Climatic Data Center.

It's parked over higher latitudes this year, so the air on the southern side isn't as loaded with moisture from the Gulf of Mexico — a key factor for severe weather.

"As the jet stream moves farther north, it is removed from that moisture source," Crouch told OurAmazingPlanet.

That's good news for anyone who lives in Tornado Alley.