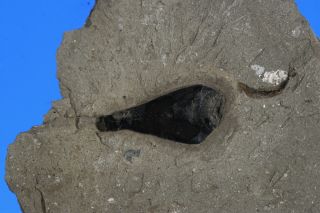 A fossilized ink sac from an ancestor of the modern cuttlefish found in the U.K. This fossil is 160 million years old.
(Image: © British Geological Society. )

The oldest fossilized pigment ever found has been discovered inside the preserved ink sacs of an ancient cuttlefish ancestor.

The ink sacs belonged to a cephalopod, the group that includes squid, octopus and cuttlefish, 160 million years ago, during the Jurassic era. The molecular structure of the ancient ink is surprisingly similar to that of modern cuttlefish Sepia officinalis, said study researcher John Simon, a professor of chemistry at the University of Virginia.

Previous studies have turned up tiny structures in everything from fossil fish eyes to dinosaur feathers containing the dark brown or black pigment melanin. But it can be tough to tell pigment structures, called melanosomes, from fossilized bacteria. Simon and his colleagues used a barrage of chemical tests to examine two fossil ink sacs found in the United Kingdom. These tests gave them a remarkably detailed look at the molecular makeup of the ink sacs' contents. [Photos: Cute Cuttlefish]

The research, published today (May 21) in the journal Proceedings of the National Academy of Sciences, confirmed that the pigment in the sacs is, in fact, melanin. There are two types of melanin: eumelanin, which is black or dark brown, and pheomelanin, which is orange-red. Using chemical methods, the researchers were able to determine that the squid ink contained eumelanin. These methods are more reliable than attempts to determine color by looking at melanosome structure, Simon said, as structure is not necessarily related to color.

"This would have been totally black," Simon said.

At 160 million years old, the ink is the oldest pigment ever found. But Simon and his colleagues suspect that with state-of-the-art chemistry, they'll be able to reach even further back into the fossil record. They're now planning to investigate some fossil deposits from England that may contain pigment dating back 500 million years. There are signs that amino acids, the molecules that make up proteins, still persist in fossilized pigment, Simon added, which would give researchers an unprecedented look at the building blocks of nature's colors.

Modern cuttlefish use their ink to distract predators, an ability that seems to stretch way back.

"The 'aha moment' for me was when we looked at the techniques for chemical bonding and we couldn't find anything that distinguished the pigment in the fossil from the pigment in a modern-day cuttlefish, which suggests the pigment hasn't changed in 160 million years," Simon said. "When I think about other evolutionary transitions that just amazes me."