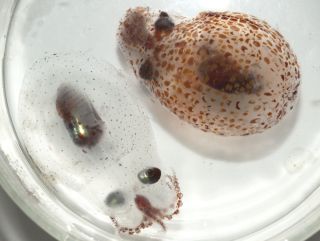 The little Japetella heathi octopus can switch from transparent to opaque in an instant, enabling it to hide from bioluminescent predators.
(Image: © Sarah Zylinski)

Two deep-ocean species of cephalopod, an octopus and a squid, can go from transparent to opaque in the blink of an eye, a new study finds.

This impressive camouflage swap is an adaptation that likely keeps the cephalopods safe from two different types of predators. The first are deep-sea creatures that hunt by looking upward for prey silhouetted against the light filtering down through thousands of feet of water. The second are fish that spotlight prey in "biological" headlights. These fish use bioluminescence, their own body-driven light source, to hunt for food.

To avoid being seen as a dark silhouette, it pays to be transparent, said study researcher Sarah Zylinski, a postdoctoral scientist at Duke University in North Carolina. But when a bioluminescent light hits a transparent surface, the effect would be like a flashlight shining on a windowpane at night, Zylinski said: very reflective, and extremely obvious.

"Being pigmented is the best strategy at that point," Zylinski told LiveScience. The octopus and squid species essentially have the best of both worlds, she said: "Being able to switch very rapidly between the two enables you to optimize your camouflage."

Many octopus, squid, cuttlefish and other cephalopods have the ability to rapidly change colors to disguise themselves from predators. Some octopus species even mimic the shapes of various fish and other sea life.

But those are all shallow-water creatures. Zylinski and her colleagues wanted to look deeper, at animals that live about 2,000 to 3,000 feet (600 to 1,000 meters) below the ocean surface. There is little light at this depth, though enough light filters down so that sharp-eyed fish can swim below prey, peering upwards and look for shadowy silhouettes.

On board research vessels in both the Sea of Cortez and over the Peru-Chile trench, Zylinski waited for deep trawling nets to pull catches out of the water. The nets are raised with painstaking slowness, Zylinski said, so that the pressure and light changes are not so abrupt for the animals caught inside.

"It's a bit like Christmas, because you never know what you're going to get in the net," she said. "Sometimes it's like that really bad Christmas where you don't get what you want, and sometimes it's really exciting."

When Zylinski scored a cephalopod catch, she quickly moved the animals from the dark nets into a dark, cool room so as not to expose them to daylight or boat lights. Then she tried various methods of stimulating color changes.

"The first set of experiments I did, we were using the kinds of stimuli that I would expect to get a response from shallow animals," Zylinski said, including looming objects or shadows passing overhead.

The deep-water creatures didn’t respond. So Zylinski tried a new method. She knew that bioluminescence is an important hunting tool in the deep sea, so it stood to reason that some animals might have developed ways to evade light. She shone bluish-white LED lights, very similar to bioluminescent light, on the cephalopods. In two species, the 3-inch (7.6-centimeter) Japetella heathi octopus and the 5-inch (12.7-cm) Onychoteuthis banksii squid, the response was instantaneous: A sudden switch from transparency to opaque red.

"This is pretty unique, just in the speed in which it was happening," Zylinski said. "It was so rapid."

The cephalopods are able to change color so quickly because their color-changing skin cells are under neural control. The squid sees the flash of light, and that visual stimulus triggers skin pigments called chromatophores to turn red. As soon as the light is gone, the pigments vanish, leaving the cephalopods transparent except for their guts and eyes.

Not all deep-sea cephalopods have the ability to switch their apperance from transparent to opaque, Zylinski said. Some come up with other ways to disguise themselves from predators. Some species are very reflective, so they reflect ambient light to hide their silhouettes. Others create their own bioluminescence to match the light filtering down from the ocean's surface, essentially beaming fake sunlight from their bellies. [Photos of Bioluminescent Wonders]

Zylinski now plans to study how the chromatophores of the Japetella octopus change with age. Younger, smaller octopuses live higher in the water column, she said. They have fewer chromatophores and rely on transparency, which serves them well because there are fewer searchlight fish in lighter water. Mature adults live deeper, where bioluminescence is more prevalent, Zylinski said, and their greater number of chromatophores allows them to become more opaque.

"I'm hoping I'll get to go back out," she said. "There's so much out there for a visual ecologist, so many amazing things."

The research appears in the November issue of the journal Current Biology.