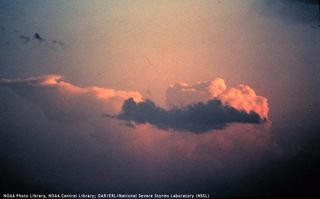 Pollution is warming the atmosphere through summer thunderstorms, a new study suggests. How much the warming effect of these clouds offsets the cooling that other clouds provide is not yet clear.

Pollution particles in the air strengthen thunderstorm clouds, causing their anvil-shaped tops to spread out high in the atmosphere and capture heat — especially at night.

"Global climate models don't see this effect because thunderstorm clouds simulated in those models do not include enough detail," study researcher Jiwen Fan, of the Department of Energy's Pacific Northwest National Laboratory, said in a statement. "The large amount of heat trapped by the pollution-enhanced clouds could potentially impact regional circulation and modify weather systems."

The study was published May 10 in the journal Geophysical Research Letters.

Called deep convective clouds, thunderstorm clouds reflect a lot of the sun's energy back into space, trap heat that rises from the surface, and return evaporated water back to the surface as rain, making them an important part of the climate cycle.

Inside a thunderstorm cloud, warm air rises in updrafts, pushing particles suspended in the air, like those from smokestacks, higher. Higher up, water vapor cools and condenses onto the aerosols to form droplets, building the cloud. At the same time, cold air falls, creating a convective cycle. Generally, the top of the cloud spreads out like an anvil.

Previous work showed that when it's not too windy, pollution leads to bigger clouds. This occurs because the water in the air is spread between more particles, leading to smaller droplets that are too small to rain.

Instead of raining, the small droplets ride the updrafts higher, where they freeze and absorb more water vapor. Collectively, these events lead to bigger, more vigorous convective clouds that live longer.

The researchers used high-performance computing to analyze two different types of storm systems: Warm summer thunderstorms in southeastern China and cool, windy frontal systems on the Great Plains of Oklahoma, and varied conditions such as wind speed and air pollution.

They found that in warm summer thunderstorms, pollution led to stronger storms with larger anvils. Compared to the cloud anvils that developed in clean air, the larger anvils both warmed more — by trapping more heat — and cooled more — by reflecting additional sunlight back to space. On average, however, the warming effect dominated. The springtime frontal clouds did not have a similarly significant warming effect.

"Those numbers for the warming are very big," said Fan, "but they are calculated only for the exact day when the thunderstorms occur. Over a longer time-scale such as a month or a season, the average amount of warming would be less because those clouds would not appear everyday."