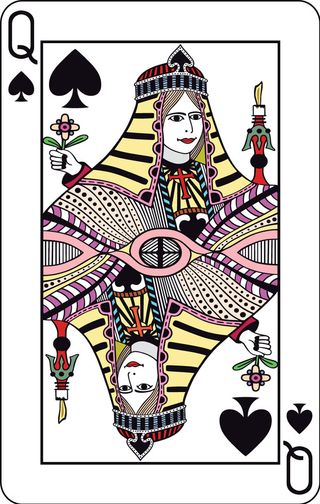 The Black Queen Hypothesis draws on a card game to explain a dynamic in the evolution of microbes.
(Image: © synchR | shutterstock)

Whether you are trying to improve your hand in a card game or improve your chances of surviving in a microbial soup, sometimes it pays to get rid of something.

A new theory, named for the card game Hearts and detailed in the March/April issue of the journal mBio, seeks to explain how some microbes simplify themselves by freeloading on their neighbors.

For example, common marine microbes, including Prochlorococcus, lack the ability to produce an enzyme thought to be the primary defense against hydrogen peroxide, a corrosive chemical formed when sunlight hits the surface of the ocean.

So how do these microbes survive? It appears they benefit from the work of their neighbors, which produce this enzyme and keep hydrogen peroxide levels under control.

The microbes in question benefit from giving up the ability to produce this enzyme because it requires iron, an element that can be in short supply in marine waters.

"Such functions are costly and therefore undesirable, leading to a selective advantage for organisms that stop performing them," the scientists wrote.

Functions, such as neutralizing hydrogen peroxide, are crucial for a community of organisms, so one player — in this case, other microbes they call "helpers"— must continue to perform them.

"After all, one cannot play Hearts without a queen of spades," wrote the team, Jeffrey Morris and Richard Lenski of Michigan State University and the BEACON Center for the Study of Evolution in Action, and Erik Zinser of the University of Tennessee, Knoxville.

The evolutionary process described by the Black Queen Hypothesis can be harmful to the "helper" organism, but the interaction can also be neutral or positive.

For instance, Prochlorococcus is photosynthetic, meaning it converts sunlight and carbon dioxide into organic compounds. The "helper" bacteria, those that can still bring down hydrogen peroxide levels, need to eat organic compounds, so an increase in Prochlorococcus also benefits the helpers, they wrote. [Amazing Photos: The Little Things in Life]

A "helper" could acquire multiple costly functions that are necessary for life, ensuring its job security since the rest of the community would depend on it, they suggest, drawing a parallel to the "shoot the moon" strategy in Hearts, in which a player attempts to capture all the point-scoring cards.

This is not the first evolutionary theory with a name that references a playing card. The Red Queen Hypothesis describes the evolutionary race between organisms with competing interests, such as parasites and their hosts, or prey and predators.

Its name derives from a quote from the Queen of Hearts in Lewis Carroll's book "Through the Looking-Glass": "It takes all the running you can do, to keep in the same place."