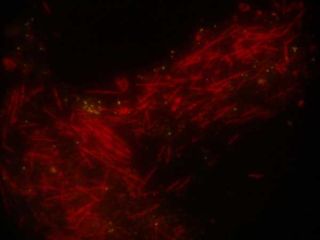 Fertilizing the oceans with iron — a tactic that "geoengineers" have proposed to fight global warming — could inadvertently spur the growth of toxic microbes, warn scientists who analyzed water samples from past iron-fertilization experiments.

Toxin-producing algae that thrive on iron and can contaminate marine life are more widespread than suspected, the researchers said.  The finding could impact proposed iron-fertilization projects.

"This work definitely reveals a wrinkle in those plans," said researcher Kenneth Coale, director of Moss Landing Marine Laboratories in California.  "It is much easier to break an ecosystem than it is to fix one."

To combat rising levels of carbon dioxide — a "greenhouse gas" that traps heat from the sun — some researchers have suggested seeding the oceans with iron. That, they say, would help spur the growth of the marine plants known as phytoplankton that naturally suck carbon dioxide from the air. [Should We Geoengineer Earth's Climate?]

However, recent findings suggest that even a massive phytoplankton bloom would result in only a modest intake of carbon dioxide. Now Coale and fellow researcher Mary Silver find that iron-fertilization projects could also trigger rapid growth of harmful algae.

"Large areas of the ocean have very little iron in them — that's why the waters there are so clear and blue, because these plants can't live there to cloud the waters," said  Silver, a biological oceanographer at the University of California, Santa Cruz. "It's the same as you see with plants in a garden — if they don't have enough nitrogen and phosphorus, they can't grow. If these ocean plants don't have any iron, they can't grow."

Algae known as Pseudo-nitschia generate toxic domoic acid. These diatoms occur regularly in coastal waters, and when their populations boom, the toxin can contaminate marine wildlife, poisoning the birds and marine mammals that feed on polluted fish, and closing shellfish and sardine fisheries.

These algae were once thought limited to coastal waters. Now researchers find they are common in the open sea as well.

"There was nothing in the science journals suggesting that such toxin-producing algae are so widespread in the open sea, nor documenting that they can get very abundant," Silver told LiveScience.

Normally, Pseudo-nitschia cells are sparse in the high seas, "so they don't have much effect," Silver said. "But these species are incredibly responsive to iron, often becoming dominant in algal blooms that result from iron fertilization. Any iron input might cause a bloom of the cells that make the toxin."

In 2007, on a research cruise to study iron chemistry in the Gulf of Alaska, Silver and her colleagues often discovered Pseudo-nitschia in samples collected at sea. Analyses back in the lab revealed the associated toxin was present, too.

Silver then teamed up with Coale to analyze old water samples collected during two iron-fertilization experiments conducted in 1995 and 2002.

"We thought the toxin would have broken down, but it was still there," Silver said.

The researchers also investigated water samples from three expeditions in the North Pacific independent from the iron-fertilization experiments. Their analysis indicated that waters throughout the Pacific naturally contain Pseudo-nitschia linked with neurotoxin.

Oceanic blooms of this algae probably occur due to iron deposited by volcanic eruptions, dust storms and other airborne sources, Silver said.

"It is a natural phenomenon and likely has been for millions of years," Silver said. "But those are sporadic occurrences. To do iron enrichment on a large scale could be dangerous, because, if it causes blooms of Pseudo-nitschia, the toxin might get into the food chain, as it does in the coastal zone."

"We should have viable strategies to remove carbon from the atmosphere," Coale told LiveScience. "Iron fertilization is still one option in our toolbox, but now the label on the box must read, 'Caution, may produce harmful algal blooms.'"

The scientists detailed their findings online Nov. 8 in the Proceedings of the National Academy of Sciences.