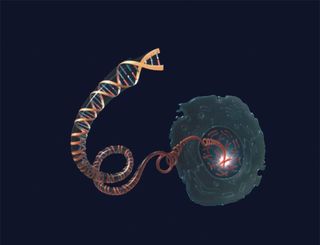 An error that created a duplicate gene long ago may be responsible for critical features of the human brain, according to a new study. (Shown here, a DNA molecule unwinding from a chromosome inside the nucleus of a cell.)
(Image: © National Human Genome Research Institute)

A copying error appears to be responsible for critical features of the human brain that distinguish us from our closest primate kin, new research finds.

When tested out in mice, researchers found this "error" caused the rodents' brain cells to move into place faster and enabled more connections between brain cells.

When any cell divides, it first copies its entire genome. During this process, it can make errors. The cell usually fixes errors in the DNA. But when they aren't fixed, they become permanent changes called mutations, which are sometimes hurtful and sometimes helpful, though usually innocuous.

One type of error is duplication, when the DNA-copying machinery accidentally copies a section of the genome twice. The second copy can be changed in future copies — gaining mutations or losing parts.

The researchers scanned the human genome for these duplications, and found that many of them seem to play a role in the developing brain. [10 Fun Facts About the Brain]

"There are approximately 30 genes that were selectively duplicated in humans," study researcher Franck Polleux, of The Scripps Research Institute in La Jolla, Calif., said in a statement. "These are some of our most recent genomic innovations."

An extra copy of a gene gives evolution something to work with: Like modeling clay, this gene isn't essential like the original copy, so changes can be made to it without damaging the resulting organism.

The second, more recent, duplication seems to be incomplete, with only part of the gene being duplicated. The researchers think this partially duplicated gene is able to interfere with the actions of the original, ancestral copy of SRGAP2. When the researchers added  the partially duplicated gene copy to the mouse genome (mice don’t normally have it) it seemed to speed the migration of brain cells during development, which makes brain organization more efficient.

These cells that expressed the incomplete duplication of SRGAP2 also had more "spines" — knoblike extensions on the cell surface that connect with other brain cells, which make them look more like human brain cells.

Interestingly, the incomplete copy of the gene seems to have showed up just as the extinct hominin Australopithecus made room for the genus Homo, which led to modern humans. That's also when the brains of our ancestors began to expand and when dramatic changes in cognitive abilities are likely to have emerged.

"We may have been looking at the wrong types of mutations to explain human and great ape differences," study researcher Evan Eichler, of the University of Washington, said in a statement. "These episodic and large duplication events could have allowed for radical — potentially Earth-shattering — changes in brain development and brain function."

The study was published in the May 11 issue of the journal Cell.