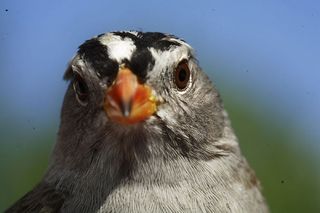 Migrating adult songbirds that get lost or thrown off-course are much better at getting back on track than juveniles, thanks to internal navigational maps based on previous trips.

Just how birds migrating across thousands of miles find their way from their summer breeding grounds to their winter homes has long been a mystery to scientists. Of particular interest was whether these birds could find their way home if they were knocked off course, and if young birds could do it as well as their elders.

It turns out that in addition to an innate sense of direction, adult birds rely on experience.

To figure this out, Princeton University scientists displaced 15 adult and 15 juvenile Gambel's white-crowned sparrows to the East Coast from their normal migratory route along the West Coast.

These songbirds typically spend their summers at breeding grounds in Alaska and the Northwest United States, but come fall, they set out for their wintering grounds in the Southwest and Mexico. Unlike some species that migrate in groups, white-crowned sparrows, including juveniles that have never before made the trip, travel alone at night.

The birds in the study, detailed in the Nov. 5 issue of the journal Proceedings of the National Academy of Sciences, were transported 3,700 kilometers (2,300 miles) east to Princeton, New Jersey, from a stopover site in Washington along their normal migration route.

Though they had likely never before been east of the Rocky Mountains, once released, the adult birds quickly realized they were significantly east of where they wanted to be and began to fly in a southwesterly direction to their normal wintering grounds.

The juvenile birds, on the other hand, went with their innate migratory instinct.

"The juveniles, they just kept on flying south as if nothing had happened," said study leader Kasper Thorup of Princeton.

The adults have been to the wintering grounds before and, this study suggests, have formed an internal map of sorts on a continent-wide scale that tells them, "I'm way too far east, so I should probably fly more west," Thorup said.

Just what cues them into their wrong position isn't clear, and several mechanisms have been proposed, including their sense of smell and their ability to detect differences in Earth's magnetic fields, like an internal compass.

Thorup doubts the magnetic mechanism because those cues wouldn't help a bird determine if it were too far east or west, only north or south.

Thorup says that it could simply be a case of "jet lag," with their internal clocks telling them that they are in the wrong place because the sun is rising earlier than it should. Even humans would be able to notice that difference if they were suddenly displaced, Thorup said.

It's also possible that the birds use some combination of these or other mechanisms to let them know when they're lost.

But what's clear from the plight of the juvenile sparrows, Thorup says, is that "they at least have to go to the wintering ground before they can navigate there."