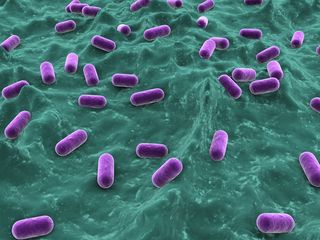 An illustration of the rod-shaped Lactobacillus that call the human vagina home.
(Image: © Sebastian Kaulitzki, Shutterstock)

The human vagina is a lively place, full of beneficial bacteria that discourage nasty microbes from invading. Now, new research finds this ecosystem is even more mysterious than previously realized.

Not only do women vary widely in what sorts of microbes call the vagina home, the study finds, but the ecosystem of the vagina can also change rapidly — to no ill effect. That's important, because while some vaginal infections are associated with changes in the vagina's native flora, it's now clear that not every change is a sign of disease.

"I think people are going to be surprised at the extent of variation that we see in these species, and that practitioners and women alike are going to see why they don't behave like their sisters or their daughters or the last patient that they saw," said study researcher Larry Forney of the University of Idaho.

Researchers have increasingly come to realize that without the help of the microbes that live on our skin, in our guts and even in our reproductive systems, humans would be in trouble. Disruptions in gut bacteria have been linked to everything from obesity to depression, for example.

Does the word vagina make you squeamish?

One of the most famous residents of the vagina is a group of bacteria called Lactobacillus, which produces lactic acid and helps keep the pH of the vagina around 4.5 — about the same acidity as the juice of a tomato. But studies have shown that at least five different types of bacterial communities that can colonize a woman's vagina. Types 1to 3 are dominated by Lactobacillus species, while the last two types are a diverse bunch without many Lactobacillus. White women are more likely to host a type 1 colony, dominated by Lactobacillus crispatus, than black women, who more often harbor diverse type 4 colonies. [10 Odd Facts About the Female Body]

Now, Forney, his colleague Jacques Ravel of the University of Maryland and their collaborators have shown that this vaginal microbial "fingerprint" changes over time in individual women, with one colony type displacing another, sometimes quite rapidly. The researchers analyzed vaginal microbe samples, taken by a swab twice a week for 16 weeks from 32 women. The women also kept daily diaries of their activities and hygiene.

"With 32 women, we can capture almost all the different types of communities that we have observed in previous samples," Ravel said.

The researchers analyzed the genes of the microbes discovered in order to identify them. They found that the vaginal ecosystem varies widely over time, sometimes changing during menstruation, sometimes swapping from one colony type for another as a result of sexual activity or unknown reasons. In some women, monthly bleeding didn't perturb the microbes at all; in others, the period heralded a short-lived era in which on microbe would reign supreme, only to be replaced when the bleeding ended by another species that dominated the rest of the month.

"We know that different women have different kinds of vaginal microbiota, and now we know that over time the dynamics of the change that we observed vary," Ravel told LiveScience.

The unstable world of the vagina is more than a scientific curiosity. Disruptions in the vaginal "microbiome" have been linked with bacterial vaginosis, a common condition sometimes marked by itching, unusual discharge and unpleasant odor. [The Sex Quiz: Myths, Taboos and Bizarre Facts]

The problem, said William Ledger, a gynecologist at Weill Cornell Medical College, is that about half of women who get a diagnosis of bacterial vaginosis have no symptoms at all — laboratory tests mark them as having an out-of-whack vaginal ecosystem, and most doctors respond with antibiotics to bring the vagina back to "normal." But the new study shows that it's actually fluctuations, not stability, that are normal for many women.

"What we're saying is there can be changes in the flora," said Ledger, who was not involved in the original study put penned an opinion piece published alongside it. "We think that women are probably in most cases able to modify these changes and get back to what their normal status is and that they shouldn't be treated [if they don't have symptoms]."

The research showed that even as microbes change, their essential functions might not, Ravel said. If you assume that the only healthy vagina is a Lactobacillus-colonized vagina, you might assume that if you don't see Lactobacillus present, the woman is ill. In fact, other species may take up the acid-generating slack in the absence of Lactobacillus, the researchers found.

"We hope that by using more personalized treatments based on what a woman looks like over time, you can actually start preventing disease instead of just curing [it]," Ravel said."It can have a lot of implications in medicine, for example, reducing the use of antibiotics."

Overuse of antibiotics can result in drug-resistant bacteria.

Mystery remains about what drives the changes in a woman's vaginal ecosystem. Unlike gut or skin bacteria, vaginal bacteria don't get outside sources of nutrients such as food or lotions (with the possible exception of vaginal lubricants), Forney said. Initial colonization probably happens at birth, but the bacterial colonies change during puberty and menopause, he said. Estrogen levels, sexual activity and menstruation likely all play a role in short-term fluctuations.

"It's a remarkable system in that it tends to stay within certain boundaries," Forney said. "You don't see the system just come apart. It comes back. It's a very resilient system."

That resilience and the specific bacteria that tend to show up suggest an evolutionary selection for bacteria that help women survive and pass on their genes in some way, Forney said. Besides the microbes' role in preventing vaginal infections, they may also play a role in fertility and childbirth, protecting the infant during labor, for example, Ravel said, though that is "all speculation." [5 Reasons Being a Woman Is Good for Your Health]

The researchers are now studying a larger group of women and collecting daily vaginal samples to better understand how fast change happens. One hundred and sixty women are already enrolled and have sampled their vaginas on a daily basis for 10 weeks, Ravel said. The goal is both to understand any changes that come before a vaginal infection, and to unravel the mysteries of the microbiome more broadly, he said.

"One of our main drivers in some of the next-step questions that we are taking on is trying to understand the true function of the vaginal microbiota," Ravel said.