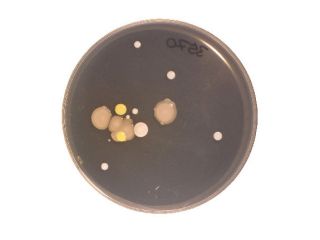 These microbes came from someone's bellybutton. In addition to stirring up microbes already present when we walk into a room, we also shed some microbes from our skin.
(Image: © Bellybutton Biodiversity project)

Merely walking into a room can begin to stir up the microbial soup that fills it — one person can send about 37 million bacteria into the air every hour, according to new research that measured microbes suspended in a room when it was occupied and unoccupied.

"We live in this microbial soup," Jordan Peccia, a study researcher and associate professor of environmental engineering at Yale, said in a press release issued by the university. "Most people are re-suspending what's already been deposited before. The floor dust turns out to be the major source of the bacteria we breathe."

But we do make our own contributions. About 18 percent of the bacteria they found belong to varieties that inhabit human skin, including their most common find, Propionibacterineae.

As compared with air outside, the results revealed "a distinct indoor air signature of bacteria with associations to human skin, hair and nostrils," Peccia and colleagues wrote in the study.

Looking at both bacteria and fungi, the team found that on average, one person contributes 0.001 ounces (31 milligrams) of microbial material to indoor air per hour.

The research team measured and analyzed samples from the air in a ground-floor classroom for four days when it was continuously vacant and four days when it hosted three to five classes. The windows and doors were kept shut, and the HVAC system operated normally. They also sampled outdoors for comparison.

Their analysis showed that the airborne concentrations of large fungal particles and medium-size, aerodynamic, bacterial particles increased when the room was occupied. This is significant because the size of the microbial particles affects how long they will remain in the air.

The study was published online Feb. 13 in the journal Indoor Air.