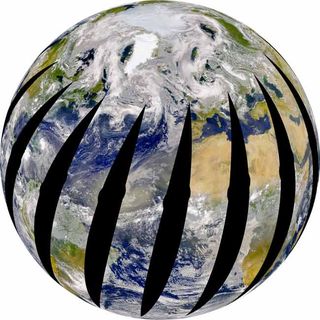 This image, captured by the Sea-viewing Wide Field-of-view Sensor (SeaWiFS) instrument, shows wide swaths of the planet. On the right is the Sahara Desert, Earthâ€™s biggest dust-producing machine. In the far upper left is North America, this dust stormâ€™s likely target. In the center of the picture, intermixed with clouds, is the swirling dust storm, nearly the size of the United States.
(Image: © NASA Earth Observatory)

Dust clouds blowing across the Atlantic Ocean carry hidden pathogens that might reach the United States.

While the dust itself can cause respiratory stress, scientists have now confirmed that clouds originating in Africa carry microbial life that can cause disease in humans, plants, and other animals far from the source.

Desert-dust storms whip up and disperse an estimated 2.4 billion tons of soil and dried sediment throughout the Earth's atmosphere annually.

"Since a gram of desert soil may contain as many as 1 billion bacterial cells, the presence of airborne dust should correspond with increased concentrations of airborne microorganisms," said Dale Griffin, a scientist with the U.S. Geological Survey.

Griffin and his colleagues presented their latest findings last month at the 106th General Meeting of the American Society for Microbiology in Orlando, Florida.

During the African dust storm season, which runs May to October, strong winds in the Sahara Desert kick up major clouds of dust that can drift across the Atlantic Ocean in just a few days. Some of the dust settles in the ocean, but a large amount dumps on the Caribbean islands and the southeastern United States, particularly Florida.

"On the Florida coast you might wake up and see what we call a 'tequila sunrise,'" Griffin said, referring to Florida's fiery sunrises. "Well, that orange is African dust."

Traces of African dust have been discovered as far west as New Mexico. The western states are also the recipients of dust that's been stirred up in China's deserts and blown across the Pacific.

Previous studies in Korea and Trinidad have reported that citizens experience more respiratory stress and visit the emergency room with respiratory problems more frequently following such storms, Griffin said. But researchers consider the tiny microbes—mainly bacteria and fungi—that get caught up in these dusty gales as an even greater concern.

Microbes in the mix

Historically, scientists believed that several days of ultraviolet light exposure would kill off any microbes traveling in dust clouds. Yet, when Griffin and his colleagues screened air in the middle of the Atlantic Ocean, they found viable airborne microbe populations.

On 24 of the 40 sampling days during May and June 2003, they collected viable amounts of bacteria and fungi. The three highest sample returns were collected during the two highest periods of dust activity as determined by the U.S. Navy's Naval Aerosol Analysis and Prediction System Global Aerosol Model.

"It doesn't matter where we do the research, we typically identify 20 to 30 percent of the microbes in dust clouds as known pathogens to some animal on the planet," Griffin told LiveScience.

DNA analysis matched two of the airborne substances 100 percent to dust-borne samples previously collected in Mali, a landlocked country in Western Africa. One of them, a known human pathogen, has also been found mixed in with African desert dust while blowing around the U.S. Virgin Islands.

Additional analysis identified a number of bacteria and fungi that cause disease in animals and plants, including one responsible for damaging Florida sycamore trees.

"It is tempting to speculate that transatlantic transport of dust could be a vector to renew reservoirs of some plant and animal pathogens in North America and could also be the cause of new diseases," Griffin said.