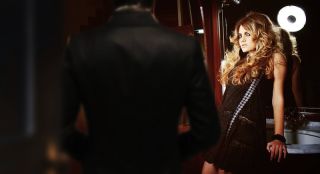 Prostitution is at the heart of a scandal embroiling the Secret Service after a trip to Colombia in April.
(Image: © AlexAnnaButs, Shutterstock)

The Secret Service is running an internal investigation of its alleged involvement in a prostitution scandal in Colombia, even as rumors fly about visits by the President's security detail to strip clubs dating back as far as the Clinton administration. True or not, the allegations bring up an obvious question: Why would these men risk their jobs to buy sex?

In fact, research shows that men who buy sex do so for a variety of reasons, many of which vary by culture. Social acceptance of prostitution makes it more likely for men to seek out prostitutes, as do certain sexual attitudes. For some men, the risk is part of the appeal.

"One of the motivations behind seeking prostitutes for some men is that there's something exciting or risky about it," said Martin Monto, a sociologist at the University of Portland who has researched prostitution. "The illicit nature of it can make it more exciting."

"Johns" — or men who visit prostitutes — are not easy to study, given the secretive and often illegal nature of their sexual habits. Researchers have traditionally focused on the supply side of the prostitution equation, interviewing sex workers and trying to understand how women get into the business. (Women who visit prostitutes are even less studied, in part because they're much rarer than men who do so. According to news reports, the first legal male prostitute catering to women in Nevada, where prostitution is allowed, quit after two months, having served fewer than 10 customers.) [Busted! 6 Gender Myths in the Bedroom & Beyond]

Do you think prostitution should be legal?

Because of the danger of underreporting by men reluctant to admit their prostitution-related activities, other researchers have used arrest data to extrapolate out the number of men frequenting prostitutes. Those studies estimate that about 2 percent to 4 percent of American men have visited a prostitute in the last year, said Devon Brewer of the Seattle-based consulting firm Interdisciplinary Scientific Research, who has conducted these studies.

What makes a john

Although johns make up a small portion of the population, large-scale studies show only a few differences between them and other men, Monto told LiveScience. Occasional users — men usually caught after propositioning an undercover police officer — are slightly less likely to be married than the general population of American men (59.3 percent versus 44.2 percent, respectively, according to a study by Monto published in the journal Violence Against Women in 2004). And if they are married, the marriage is more likely to be unhappy. Unsurprisingly, johns are more sexually liberal than men who don’t frequent prostitutes.

Military men are more likely to have visited prostitutes in their lifetime, likely due to both opportunity and professional culture, Monto said. The Secret Service is a "militarized" subculture itself, Monto said, perhaps explaining the current allegations that the agents hired prostitutes during President Barack Obama's recent trip to Colombia.

"It's learned in these types of professional subcultures that involve travelling far from your soil," Monto said. "They also involve local economies that cater to service members." [Sex Quiz: Myths, Taboos & Bizarre Facts]

Men who report more contact with prostitutes tend to report more sexual partners, more sexual activity, less happy marriages and more sexually liberal attitudes than men who report soliciting a prostitute just once. Hobbyists or "sex tourists" — the kind of men who post on message boards that review call girls — tend to see frequenting prostitutes as a lifestyle and have much larger numbers of sex partners compared with occasional johns, Monto said.

Smaller-scale studies sometimes turn up more striking results. For example, a yet-unpublished study presented in 2011 by the anti-prostitution nonprofit Prostitution Research & Education, based in San Francisco, compared 101 men who had bought sex with 100 men with similar age, race and education level who had not (these men were also infrequent pornography users and had not visited a strip club more than once in the past year).

The sex-buying men were recruited through ads in newspapers and on Craigslist. They were more likely than non-sex-buyers to have a prior criminal history, to say they would commit rape if they could get away with it and to have coerced non-prostitute sex partners into sex. They were also worse at guessing how prostitutes would describe their jobs than the men who didn't buy sex — though johns often volunteered details on the harms of prostitution in in-depth interviews, said study researcher Melissa Farley.

"In general, most men know that prostitution and trafficking are harmful," Farley told LiveScience. "They're not under some naïve illusion that this is an activity women like to engage in."

Why visit a prostitute?

Results from studies like Farley's are difficult to generalize, given that men willing to volunteer for a research study may not be representative of sex-buyers as a whole (Farley said she'd expect to see similar results in a true national sample). But the stories the men tell can help explain why men visit prostitutes.

"Prostitution is for satisfying a man," one man told Farley and her colleagues. "It makes the world interesting; it creates variety, like a delicatessen — you order this, you [order] that."

In fact, the reasons why men visit prostitutes are rather unsurprising, according to Monto.

"If I were to take a group of 30 people and ask them to guess the top 10 reasons men seek out prostitutes, they would be correct," Monto said.

In other words, the motivations you've heard are true: Some men visit prostitutes because they want more sex or a different kind of person than their regular partner. Others are lonely. Still others are socially awkward and have trouble on the typical dating scene.

One 2006 study conducted in Sweden and published in the journal Sexologies reviewed research on why men frequent prostitutes and found that the answers fell in five categories. Some men had what the researcher called a "whore fantasy," marked by excitement tinged by a little bit of contempt, the "dirtiness" of the prostitute making the encounter more exciting. Others went for new sex, things they couldn't or wouldn't ask of their wives or girlfriends. A third motivation painted sex as a consumer product — men could go in, get what they wanted and get out with little fuss. Other men saw sex with prostitutes as a balm against loneliness. Many of these men were older, shy or physically handicapped and saw prostitutes as their only outlet for sex and female companionship.

Finally, the power dynamic of prostitution appealed to some men, who reported that sex workers treated them "like a man," and would do what they were told.

The most troubling johns, of course, are those who act violently toward prostitutes. Identifying these men is like finding the proverbial needle in a haystack, the Interdisciplinary Scientific Research firm's Brewer told LiveScience. [The History of Human Aggression]

Comparing violent johns with other sex-buyers arrested in the same communities, Brewer and his colleagues have found that the best way to predict a violent john is by previous violent behavior. Johns who had a history of violence, rape and property offenses such as burglary and theft were more likely to assault or murder prostitutes.

"If law enforcement, when they're investigating crimes of violence against prostitutes, would focus on men with a history of rape or violent offense, that would almost get half of prostitute-killers," Brewer said. "It's obviously a large pool of men, but using that as your starting basis, investigators can narrow down quite a bit the scope of men they have to focus on."

In Colombia, where the Secret Service scandal erupted, exploitation of women is a huge problem, Farley said. She has interviewed Colombian prostitutes in Bogata — women are moved around the country to areas of most demand, she said — and found high rates of coercion.