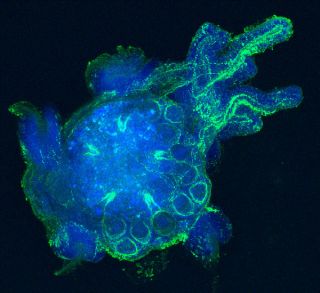 The signaling molecule histamine is visible in green in the blue cells of this sea urchin larva (Strongylocentrotus purpuratus).
(Image: © Andreas Heyland)

Most humans experience some growing pains, but, for a young sea urchin, growing up means turning yourself inside out.

New research explores the key role a familiar substance, histamine, plays in this dramatic metamorphosis from a free swimming larva to the more familiar spiny adult that lives on the seafloor.

Well known to allergy sufferers for its association with sneezing, watery eyes and other symptoms, histamine prepares a sea urchin larva to transform into a radically different adult form within an hour, said study researcher Andreas Heyland, an assistant professor at the University of Guelph in Canada.

"They turn essentially inside out, like a sock," Heyland said.

Sea-urchin larvae swim freely in the ocean, living among other tiny organisms known as plankton, and as they mature they drift deeper into the sea. Before they can settle down on the seafloor, where they will spend the rest of their lives, the larvae must be able to pick up on environmental cues that tell them they are in the right spot.

For instance, the purple sea urchin (Strongylocentrotus purpuratus) that Heyland and colleagues studied prefers rocky environments, so it may be homing in on chemical cues released by algae and kelp that already live there, he said.

In order to pick up on these cues, the larvae must go through a phase known as competence. Heyland and colleagues tested the effects of histamine on sea-urchin development and concluded that this molecule plays an important role as an internal signal within the larvae to make them competent.

The sea-urchin larvae carry a backpacklike package around with them that contains adult structures, including many appendages, called tube feet.

"The entire package comes out of the larva at the same time the larval structures disintegrate," Heyland told LiveScience. "You get this little urchin that is unfolding." [Spectacular Underwater Photos]

Other research on a different type of sea urchin found a different role for histamine. In this case, the sea urchins appeared to cue into histamines in the environment, rather than within their own bodies. Heyland's team found no evidence for this in the purple sea urchin, indicating that different species of sea urchins may use the molecule differently.

Histamine is an ancient and common signaling molecule. In humans, it plays a role in digestion, allergies, the sleep-wake cycle and memory. Plants and bacteria also use histamine, suggesting it has been a signaling molecule since long before the evolution of mammals, he said.

While histamine may be widely spread around the tree of life, organisms' systems for using it differ. However, the team did find a similarity: Histamine regulates the metamorphosis of sea urchins using a receptor related to a histamine receptor involved in communication between nerve cells in mammals.

The study was published Thursday (April 26) in the journal BMC Developmental Biology.