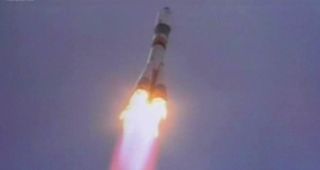 A robotic Russian cargo spacecraft launched toward the International Space Station Friday (April 20) to ferry tons of gear for the orbiting lab's crew, a flight that comes just 10 days before an American private spaceship is expected to make a historic supply run of its own.

The unmanned Progress 47 supply ship blasted off from the Baikonur Cosmodrome in central Kazakhstan at 8:50 a.m. EDT (1250 GMT) today, reaching its preliminary orbit less than 10 minutes later, NASA officials said. The supply ship, which is carrying 2.5 tons of food, fuel and supplies, is slated to dock with the space station at 10:40 a.m. EDT (1440 GMT) Sunday (April 22).

Progress 47 will replace the trash-filled Progress 46 ship, which undocked from the station Thursday and will be intentionally commanded to burn up in Earth's atmosphere over the Pacific Ocean in the days ahead. Progress 47 will meet the same fate in late July, officials said.

Progress 47's liftoff comes 10 days before the scheduled launch of the private spaceflight company SpaceX's unmanned Dragon capsule, which is due to blast off on a demonstration flight to the station on April 30. The California-based SpaceX — short for Space Exploration Technologies Corp. — holds a $1.6 billion NASA contract to make 12 supply runs to the orbiting outpost.

Dragon's debut trip to the space station is not one of those 12 contracted missions for NASA. Instead, it is a demonstration mission to see if Dragon and its Falcon 9 rocket ride have the robotic "right stuff" to meet NASA's needs. Even so, the reusable Dragon will carry about 1,150 pounds (521 kilograms) of cargo up and — unlike the expendable Progress vehicle — will transport roughly the same amount of material back down to Earth, SpaceX officials have said. [Dragon, SpaceX's Private Spaceship (Photos)]

If Dragon succeeds, it will be the first private spacecraft, and the first unmanned American spaceship, ever to berth with the station.

When NASA retired its space shuttle fleet last July, it became completely dependent on Russian, European and Japanese vessels to carry cargo and crew to the space station. NASA isn't content with this state of affairs, however; it's encouraging private American firms to develop both robotic supply ships and manned astronaut taxis.

NASA is looking to SpaceX and the Virginia-based Orbital Sciences Corp. to begin shouldering the cargo load in the next year or so; Orbital holds a $1.9 billion deal to make eight supply flights.

The space agency has also given money to SpaceX, Blue Origin, Sierra Nevada and Boeing to help them develop crewed craft. NASA has said it wants at least two of these firms' vessels to be in operation by 2017. SpaceX is modifying Dragon to carry up to seven astronauts, and company officials have estimated the crewed version could be up and running in about three years.