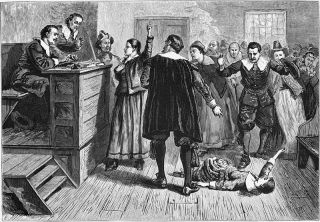 An engraving depicting a scene from the Salem Witch Trials. The central figure in this 1876 illustration of the courtroom is usually identified as Mary Walcott, 17, one of several girls in Salem with a psychological disorder known as mass hysteria, and whose condition was blamed on witchcraft..
(Image: © Public domain image. Artist unknown.)

The theory, first laid out by the economist Emily Oster in her senior thesis at Harvard University eight years ago, holds that the most active era of witchcraft trials in Europe coincided with a 400- year period of lower-than-average temperature known to climatologists as the "little ice age."Oster, now an associate professor of economics at the University of Chicago, showed that as the climate varied from year to year during this cold period, lower temperatures correlated with higher numbers of witchcraft accusations.

The correlation may not be surprising, Oster argued, in light of textual evidence from the period: popes and scholars alike clearly believed witches were capable of controlling the weather, and therefore, crippling food production.

The Salem witch trials fell within an extreme cold spell that lasted from 1680 and 1730 — one of the chilliest segments of the little ice age. The notion that weather may have instigated those trials is being revived by Salem State University historian Tad Baker in his forthcoming book, "A Storm of Witchcraft" (Oxford University Press, 2013). Building on Oster's thesis, Baker has found clues in diaries and sermons that suggest a harsh New England winter really may have set the stage for accusations of witchcraft.

According to the Salem News, one clue is a document that mentions a key player in the Salem drama, Rev. Samuel Parris, whose daughter Betty was the first to become ill in the winter of 1691-1692 because of supposed witchcraft. In that document, "Rev. Parris is arguing with his parish over the wood supply," Baker said. A winter fuel shortage would have made for a fairly miserable colonial home, and "the higher the misery quotient, the more likely you are to be seeing witches."

Psychology obviously played an important role in the Salem events; the young girls who accused their fellow townsfolk of witchcraft are believed to have been suffering from a strange psychological condition known as mass hysteria. However, the new theory suggests the hysteria may have sprung from dire economic conditions. "The witchcraft trials suggest that even when considering events and circumstances thought to be psychological or cultural, key underlying motivations can be closely related to economic circumstances," Oster wrote.

Weather patterns continue to trigger witchcraft accusations in many parts of Africa, where witch killings persist. According to a 2003 analysis by the Berkeley economist Edward Miguel, extreme rainfall — either too much or too little — coincides with a significant increase in the number of witch killings in Tanzania. The victim is typically the oldest woman in a household, killed by her own family.