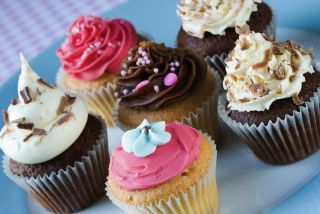 If your nucleus accumbens responds strongly to images like this, it may signal future weight gain.
(Image: © Ruth Black, Shutterstock)

The activity in a region of the brain associated with reward can predict who will gain weight or have sex in the next six months, according to new research.

"This study is nice in a sense in that it's one of the first ones to actually tie your brain responses to more long-term measures of behavior," study researcher Bill Kelley, a psychologist at Dartmouth University, told LiveScience.

In the long run, Kelley added, the brain's reward system is likely to be only a piece of the puzzle. How good a person is at overriding that system through willpower will matter too, he said.

Certain health conditions, including bulimia and obesity, have already been linked to high nucleus accumbens activity in response to food-related cues. Kelley and his colleagues wanted to find out if there was any predictive power to such linkages. So the researchers recruited 58 female college freshmen for a study in which they weighed the women and calculated their body mass index, or BMI (a measure of fatness). College freshmen were chosen because of the dreaded "Freshmen 15" weight gain, Kelley said. The researchers wanted a group of volunteers who might be at risk for putting on pounds. [8 Reasons Our Waistlines are Expanding]

The imaging technique measures blood flow to brain regions, offering a real-time picture of changing energy use in the brain at any given moment. Six months later, the researchers asked the same women back for another weigh-in and further surveys. All but 10 returned, leaving a final sample of 48.

Importantly, these reactions were behavior-specific. Weight gain was linked only with a nucleus accumbens response to food pictures, not to sexy images or neutral environmental scenes. And sexual desire and activity were linked only to the response to sexy pictures. That means specific temptations, not just an overactive nucleus accumbens, trigger these behaviors, Kelley said.

Controlling temptation may be a careful balancing act between parts of the brain that get excited for rewards and parts of the brain that rein in these urges, the researchers wrote. The nucleus accumbens activity could stand in as a proxy for future appetites, they reported, signals that other parts of the brain would need to combat in order to abstain. The women in the study may have had an uphill climb of it, given that stress can disrupt self-regulation and that the first year of college is often a stressful time.

Kelley said he suspects that the activity of the reward system may not predict weight gain over longer time periods, because people's ability to self-regulate — their willpower — may change. Unlike the unconscious "I want that!" of the brain's reward system, self-regulation is conscious and effortful. Thus, knowing your brain's triggers can help avoid them, Kelley said.

"Having the knowledge that these things can influence us in these implicit, unconscious sorts of ways is helpful in a sense because it allows us to be aware that when we're seeing these things we really have to be switched on and self-regulate," he said.