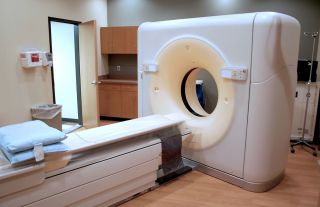 Obese people may be exposed to more radiation when they undergo a CT scans or X-rays, compared with normal-weight people, a new study says.

The study, conducted using computer models,suggests the organs of obese individuals receive up to 62 percent more radiation energy during a CT scan, compared with those of normal weight individuals.

The increase in radiation exposure occurs because radiologists often increase the power settings when doing scans on obese people, said study researcher Aiping Ding, of the Rensselaer Polytechnic Institute in Troy, N.Y. When scanners are used on their normal settings, the image is blurry because the extra fat tissue shields the organs from the X-rays.

As a result, the machines generate higher-energy X-rays that expose people to more radiation, Ding said.

Very high doses of radiation are known to increase cancer risk, but the risk from doses used in medical imaging tests, are less clear, according to the American Cancer Society.

The increased risk from a single CT scan is small compared to the medical benefit, but it is prudent to avoid unnecessary scans, for any patient, regardless of weight, Ding said.

As long as CT scans are used only when necessary, the benefits of the scan will still outweigh the risks, said Dr. Nagy Elsayyad, an assistant professor in the department of radiation oncology at the University of Miami Sylvester Cancer Center, who was not involved in the study.

The extra risk posed to an obese individual from any one scan is so slight that it will not change the way doctors use the scans, Elsayyad said.

Ding and colleagues generated 10 three-dimensional computer models of normal weight, overweight and obese individuals known as "phantoms." The researchers then simulated a CT scan on the phantoms using different settings, and calculated the radiation exposure for each body type.

On the normal setting, excess fat in the obese phantoms protected organs from radiation, resulting in a 59 percent decrease in radiation exposure to organs deep in the abdomen, such as the colon.

Currently, adjustment of the CT scanner for a better image is done by trial and error. The researchers are developing a software program to cut down on this guess work, which could reduce the amount of radiation people are exposed to. The program allows researchers to test scanner settings and chose one that will minimize the radiation dose while still providing a clear image, Ding said.

The study will be published April 6 in the journal Physics in Medicine & Biology.

Pass it on: Obese people are exposed to more radiation during a CT scan compared to normal weight people, but the benefits of these scans still outweigh the risks.