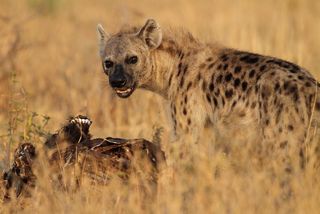 As scavengers, hyenas' diets are influenced by what humans are eating.
(Image: © Mogens Trolle, Shutterstock)

Humans aren't the only ones who give up certain foods for Lent. In the 55 days before Easter in Ethiopia, hyenas are forced to turn from scavenging to hunting to make up for Christians' fasting traditions.

Members of the Orthodox Tewahedo Church give up meat and dairy during the Lent period in Ethiopia. Now, a new study of hyena droppings finds that local hyenas, deprived of butcher scraps during this time period, supplement their diets by hunting donkeys for food instead.

Spotted hyenas are adept hunters, capable of bringing down prey such as zebras, wildebeests and even young rhinoceroses. But these pack hunters are also adaptable: They scavenge freely, devouring everything from dead birds and mammals to garbage and dung.

"Hyenas can eat almost any organic matter, even putrid carrion and anthrax-infected carcasses," study researcher Gidey Yirga of Mekelle University in Ethiopia said in a statement. "They are capable of eating and digesting all parts of their prey except hair and hooves. Bones are digested so completely that only the inorganic components are excreted in the hyena's droppings."

Knowing that hyenas scavenge from human garbage, Yirga and his colleagues investigated whether human diet changes influence what hyenas eat. They focused on Lent, collecting hyena droppings from three sites in Northern Ethiopia on the first and last days of Abye Tsome, or Lent, and then again 55 days after the fast ended. The result was a collection of 553 individual droppings.

An analysis of the scat showed that hyenas turned to a diet of donkey as humans gave up butchering meat. Before Lent, 14.8 percent of hyena droppings contained donkey hair. During Lent, that number increased to 33.1 percent, dropping again to 22.2 percent once Lent ended and butcher scraps again appeared around human settlements.

The results, published today (April 4) in the Journal of Animal Ecology, illustrate how adaptable and opportunistic hyenas are, according to the researchers. They also show how intertwined the lives of humans and hyenas really are — a fact that could have implications for how hyena-human conflict should be managed.

"Understanding details of the foraging behavior of carnivores in an anthropogenic environment can help reveal specific causes of conflict, leading to better strategies for reducing availability of anthropogenic food and preventing conflict," Yirga said.