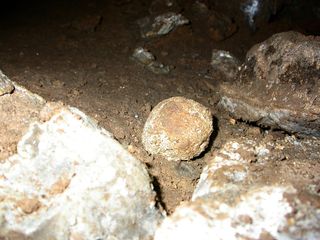 Researchers are using DNA from fossilized poop of the cave hyena, an ancient mammal which went extinct during the late Pleistocene approximately 20,000 years ago, to understand the genetics and diet of this species.
(Image: © F. Maksud )

By reading the genes in ancient poop, researchers have uncovered the diet and descendents of the cave hyena, which roamed throughout Eurasia alongside the Neanderthals.

The cave hyena, named Crocuta crocuta spelaea, lived for about 1 million years in Eurasia, before dying out some 10,000 to 30,000 years ago. Not only were they about 25 percent larger than modern hyenas, they were also more powerful and had a stronger bite, study researcher Jean-Marc Elalouf, of the Instituteof Biology and Technology Saclay, in France, told LiveScience.

The new data suggest that these prehistoric predators were probably a subspecies of the modern spotted hyena and liked to dine on red deer.

Elalouf and colleagues extracted DNA from nine specimens of fossilized dung, called coprolites, from a cave in the French Pyrenees. Two samples yielded good results, which the researchers analyzed further.

The results support previous studies that have indicated the "cave hyena" was an ancient subspecies of the modern spotted hyena — and should therefore be called the "Ice Age spotted hyena," Cajus Diedrich, a researcher from the Paleo-Logic Research Institute in Germany who wasn't involved in the study, told LiveScience in an email.

The DNA also suggested the hyena feasted mainly on red deer, something researchers had suspected based on bite marks found on deer bones in caves. The genetic data is confirmation of the diet, since it is less biased than bone finds; some animal bones are less likely to survive to modern times, Elalouf said.

In addition, "the DNA information could give us valuable insights into the population structure of the European populations in the run-up to their extinction," study researcher Gerrit Dusseldorp, of the University of Witwatersrand, in South Africa, told LiveScience.

The study will be published tomorrow, March 28, in the journal Proceedings of the Royal Society B: Biological Sciences.