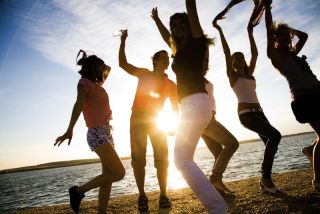 The first-ever United Nations "World Happiness Report" pegs the United States as the 10th-happiest country on Earth by way of measuring people's self-reported satisfaction with their lives.

The number is hardly set in stone, given that other questionnaires asking slightly different questions rank countries in different orders. But Northern European countries, including Denmark, Finland, Norway and Iceland, consistently rank among the happiest and most satisfied nations, the authors of the U.N. report found. Tanzania and Zimbabwe often hover at the bottom of happiness lists.

The report released this week represents a new measure of success for sustainable-development efforts, said one of the report authors John Helliwell of the Canadian Institute for Advanced Research.

"When you think about it, happiness or some measure of how satisfied people are with their lives ought to be pretty fundamental," to understanding the success of national policies, Helliwell, co-director of the institute's program for social interactions, identity and well-being, told LiveScience.

Inspired in part by Bhutan's efforts to measure "Gross National Happiness," the report reviewed several decades of happiness research. One focus of the report is the link between economic growth and happiness.

Results showed that while rich individuals tend to be happier than poor people, higher average incomes aren't always followed by gains in happiness, a seeming contradiction first noted by University of Southern California economist Richard Easterlin. Known as the "Easterlin Paradox," this fact is illustrated by American economic growth. Since the 1960s, U.S. gross national product per capita has tripled, Helliwell and his co-authors point out, but average happiness has remained unchanged. [List of World's Happiest Countries]

Taking your life as a whole, how happy are you?

The root of the paradox seems grounded in a few factors, Helliwell said. For one, the income rise in the United States has been uneven and mostly funneled to top earners. For most people, Helliwell said, income has remained flat. Not only that, but money isn't the only determinate of happiness, he said. Other factors matter as well.

"Some of these other aspects of life, like trust and social connections and so on have been weakening during this time period," Helliwell said.

Easterlin has theorized that as a country becomes richer, people still compare themselves with their neighbors and thus don't feel any more satisfied with their lives. In other words, it's relative income, not absolute income, that matters.

In fact, happiness is both internal and external, research has shown. The U.N. report lists income, work, community and governance, and people's values and religion as external sources of happiness or misery. Personal factors that are more internal include mental and physical health, family experience, education, gender and age. [7 Things That Will Make You Happy]

The goal of the research report is to encourage more countries and statistical agencies to focus on collecting data about happiness, Helliwell said. Ultimately, he said, this data can be applied in programs, government or otherwise, focused on increasing national happiness by improving things that make people happy.

A few large-scale surveys, which were reviewed in the U.N. report, do ask people about happiness, life satisfaction and positive emotions. The Gallup World Poll puts America 10th in life satisfaction from the years of 2007 to 2010. Using that survey, Costa Rica is the most satisfied nation, followed by Denmark, Ireland and Norway.

The World Values Survey and the European Values Survey, both of which use slightly different phrasings of the life-satisfaction question, peg Puerto Rico as the most satisfied nation, followed by Denmark and Colombia. The U.S. comes in at No. 25.

Looking at shorter-term bliss, Gallup also asks citizens to talk about their happiness at a specific point in time ("yesterday") rather than life as a whole. From this measurement, Ireland comes in as the happiest nation followed by Thailand, New Zealand, Canada and Iceland. The United States comes in sixth.

The least happy countries based on feelings at a moment in time are Togo, Congo and Lithuania, Gallup found. The World and European Values Surveys found that Tanzania, Zimbabwe and Iraq were the least satisfied nations overall. By Gallup's ranking of life satisfaction, Tanzania, Togo and Zimbabwe were the worst off.