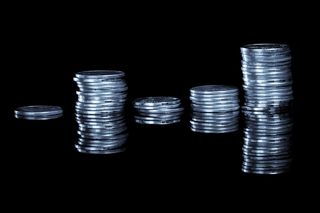 Americans are happier in times when the gap between rich and poor is smaller, a new study finds.

The reason, according to research to be published in an upcoming issue of the journal Psychological Science, is that when the income gap is large, lower- and middle-income people feel less trusting of others and expect people to treat them less fairly.

The study also provides a potential explanation for why American happiness hasn't risen along with national wealth in the last 50 years.

"Income disparity has grown a lot in the U.S., especially since the 1980s," study researcher Shigehiro Oishi of the University of Virginia said in a statement. "With that, we've seen a marked drop in life satisfaction and happiness." [Read: Does Big Government Make People Happier?]

The results apply to about 60 percent of Americans, or those in the low- and middle-income brackets. For wealthier Americans, the size of the income gap had no effect on happiness.

But it's tough to compare happiness between countries, since Argentina (a country with a large income gap) differs from Finland in many ways other than economics. To get rid of some of those variables, Oishi and his colleagues used the U.S.-only General Social Survey, which questioned 1,500 to 2,000 randomly selected Americans every year or every other year between 1972 and 2008. More than 48,000 people answered questions on how happy they were, how much they trusted others, and how fair they thought other people were.

The results showed that during times when the income gap was large, Americans in the low- and middle-income groups were less happy than during times of lower income gaps. (For wealthier people, the income gap made no difference either way — though another study has found that giving away money, which would seem to lessen that gap, can be very rewarding.) Changes in total household income weren't related to the happiness ups and downs.

The results are correlational, so researchers can't be sure that the income gap directly caused unhappiness, but a little more digging turned up a possible explanation. When the income gap grew, low- and middle-class people became increasingly distrustful of their fellow Americans. They were also less likely to believe that fair treatment from others was the norm. This social fracturing could explain the drop in happiness during these times, the researchers wrote.

If the results hold, the authors wrote, they explain why countries with lower income gaps, including Denmark, France and Germany, have become happier as their wealth has grown, while Americans have not.

"The implications are clear," Oishi said. "If we care about the happiness of most people, we need to do something about income inequality."