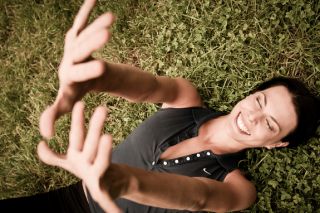 Rather than trying so hard to attain happiness, relax, it might bring you a smile.
(Image: © © Martin Novak | Dreamstime.com)

While the pursuit of happiness may seem like a reasonable aim, new research shows that making happiness a personal goal will only stand in the way of your achieving it.

The researchers found that women who valued happiness more tended to report being less happy and more depressed than women who didn't place such a high premium on a lasting smile. [5 Things That Will Make You Happier]

"Wanting to be happy can make you less happy," said study researcher Iris Mauss, an assistant professor in psychology at the University of Denver. "If you explicitly and purposely focus on happiness, that appears to have a self-defeating quality."

In the first study, researchers surveyed 59 women who reported having a stressful life event in the past six months, such as a divorce, self-injury, injury or death of a close family member, sudden unemployment, or exposure to crime. Women also indicated the value they placed on happiness and their stress levels.

(The researchers studied only women, because past research has shown that women and men typically have similar emotional responses in the lab, but that men are more likely to conceal those responses.) Among women who reported lower stress levels, those who valued happiness more reported being less happy and had an average of 17 symptoms of depression versus four for low-stress women who valued happiness less. Regardless of the value placed on happiness, the high-stress women showed no significant differences in their happiness levels.

This is important, Mauss explained, because women with higher levels of stress can blame their unhappiness on that stress. So, regardless of the value they place on happiness, the stress is unlikely to leave them the chance to worry about how happy they are.

While this study showed a link between focus on happiness and actual happiness, it didn't show that one was causing the other.

To figure that out, in the second study, researchers randomly assigned 69 female college students to one of two groups. Half of them read about how valuing happiness could benefit social relationships, professional success and personal health, while others read that "making accurate judgments" could lead to those same benefits. Participants then watched either a happy or sad film clip.

Those who read about the benefits of accurate judgments (and so were primed to not put a high value on happiness) reported higher levels of happiness after viewing the happy clip; women who had read about valuing happiness reported similarly low bliss levels as those who had watched the sad clip. There was little difference in happiness ratings between the two groups after watching the sad clip (neither group reported being very happy). Why we're not happy

Mauss noted two mechanisms by which happiness-focused women might find themselves in the dumps. [10 Most Destructive Human Behaviors] For one, they might set higher goals for themselves. "When people want to be happy, they set higher standards by which they're more likely to fall short," Mauss said. "This, in turn, may lead to greater discontent, in turn lowering levels of happiness and well-being."

The second study, she said, provided evidence for this, as the link was the experimental result of a sad, disappointing movie clip. Second, it might be that an emphasis on personal happiness leads someone to neglect relationships with friends and family. "It might have negative social effects," Mauss said. "If you want to be happy, you may be more likely to focus on yourself, and so that can have negative effects on your social networks and your social connections." Jonathan Schooler, a professor of psychology at the University of California, Santa Barbara, said that while more research is needed to verify the study's findings, it gives more evidence to the idea that setting happiness itself as a goal can be self-defeating. "One reason why people are vulnerable when they explicitly emphasize the pursuit of happiness is that they set themselves up for disappointment," said Schooler, who was not involved in the  study.

A better strategy, he said, might be to set goals that have concrete ends to them — specific attainments, awards or achievements. If you want to be happy, the happiness itself can be fleeting, Schooler said. "How certain are you that you are really as happy as you hoped you could be? [Happiness] doesn’t have a straightforward marker to let you know you've accomplished it. Because of that, it could be more elusive." At this point, Schooler said, some follow-up should focus on how to set goals that may result in happiness. "This is really a fledgling area of inquiry," he said. "We really need more studies to nail down ... how can you achieve happiness without incurring these negative consequences?"

How to become happy

Mauss explained she is not saying, "Don't try to be happy," but rather that an exaggerated focus on happiness can have downsides. It's certainly not always the case that pursuing happiness is a bad thing. If you give people the right tools to pursue happiness, then they can increase their happiness and well-being.” She said there were some methods that may ultimately help people achieve happiness without the negative effects that accompany its pursuit. One way, she said, may be for people to learn to engage their emotions by doing activities they enjoy, while taking the focus off the goal of happiness itself. “One of the most effective ways to actually increase happiness is to engage in activities, which basically entails pursuing happiness in an indirect and non-effortful manner,” Mauss said. Another is to change the type of happiness one pursues.

But, Schooler said, the research is not yet far enough along to justify drastic changes in life goals people have already set for themselves. "Making ourselves happy is a very important issue," Schooler said. "But I think we should be cautious in dramatically changing our goals and aspirations on the basis of it. This is the kind of work that needs to be carefully replicated and pursued in a variety of different ways before we rely too heavily on this and a few other studies to change our behaviors." The paper, written by researchers at the University of Denver, Boston College, Hebrew University and the University of California, Berkeley, was published online in the journal Emotion and will be detailed in a forthcoming print issue of the journal.

The team notes that the study may not apply to all cultures, since Americans may place a higher value on the pursuit of happiness.