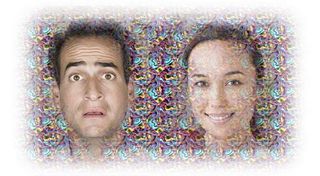 Fearful faces tend to be processed faster by the brain than happy ones, possibly for evolutionary survival reasons.
(Image: © Vanderbilt University)

People recognize a fearful expression faster than any other, a new study finds.

Researchers at Vanderbilt University set out to test how quickly people become aware of fearful, neutral and happy expressions. Because human brains can process facial expressions with astonishing speed—in fewer than 40 milliseconds—the psychologists devised a way to slow down this recognition speed so that it would be measurable.

Study subjects looked at a screen through a viewer (similar to the eyepiece of a microscope) which allowed different images to be presented to each eye. Multiple flashing images were presented to one eye, while a static image of a face was shown to the other. The flashing images acted like visual "noise" to suppress the image of the face.

The subjects indicated when they first became aware of seeing a face, and it turns out they became aware of faces with fearful expressions faster than those with neutral or happy ones.

The researchers think that a region of the brain called the amygdala, which has a primary role in processing emotional information, shortcuts the normal brain pathway for processing visual images and causes the fearful face to jump out more quickly.

"The amygdala receives information before it goes to the cortex, which is where most visual information goes first," said study team member David Zald of Vanderbilt. "We think the amygdala has some crude ability to process stimuli and that it can cue some other visual areas to what they need to focus on."

Zald and his colleagues think the expression of the eyes in a fearful face holds the key to its quick recognition.

"Fearful eyes are a particular shape, where you get more of the whites of the eye showing," Zald said. "That may be the sort of simple feature that the amygdala can pick up on, because it's only getting a fairly crude representation."

The fast recognition of fear may be an evolutionary survival mechanism geared to direct attention to signals of potential threats in the environment.

"One of those signals is a look of fear," Zald said.

Happy expressions were the slowest to be recognized, the study (detailed in the November issue of the journal Emotion) found, which also fits into the evolutionary explanation.

"What we believe is happening is that the happy faces signal safety," Zald said. "If something is safe, you don't have to pay attention to it."