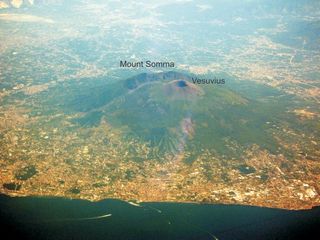 While majoring in geology at the University of Pisa in 1991, I traveled on a class fieldtrip to Vulcano —a small island volcano near Sicily’s north shore. (The word “volcano” originated from Vulcano, which was named after the Roman God of Fire.)

During the fieldtrip, I climbed to the top of Vulcano and then descended into its summit crater. When I reached the crater floor, I marveled at the tranquility and silence that filled the air. But then, as I glanced up at the steep, steaming, yellow-sulfur covered crater walls surrounding me, and then glanced down at my feet planted on top of a “cork” plugging the throat of an active volcano, I remembered that this volcano could violently explode at any time.

Awed by the contrast between Vulcano’s serenity and strength, right then and there, I decided to devote the rest of my life to studying volcanoes. But instead of working at volcano tops, I have since 1993 worked mostly at volcano bases, digging and sifting through volcanic ash and rock for insights into the processes involved in eruptions. (My husband, also a geologist, studies geologic features at the summits of active volcanoes, when he is not helping to look after our baby.)

While earning my Ph.D. at the University of Pisa, I turned my attention to Vesuvius, which is one of the world’s most dangerous volcanoes.

Vesuvius repeatedly erupted over the last 18,000 years, and it is located in one of the world’s most densely populated areas: About 700,000 people live directly in the volcano’s destructive shadow, and another million people live within a few miles of the volcano in the teeming metropolis of Naples.

Vesuvius last erupted in 1944, near the end of World War II. The engines of some allied planes and some nearby towns were damaged not by bombs but by Vesuvius’s ash and lava. Because the next eruption of this still-smoking volcano could come at any time, scientists are currently working feverishly to better understand it.

As a graduate student, I researched Vesuvius’s 79 AD eruption, which killed thousands of residents of the Roman cities of Pompeii and Herculaneum and other towns dotting Vesuvius’ broad slopes. My study addressed the most devastating of all volcanic phenomena, pyroclastic flows, scalding currents of ash, poisonous gases and rocks that shoot down volcanic slopes at hundreds of miles per hour.

From eyewitness accounts, we know that Vesuvius released a series of huge, vertical columns of poisonous gas and ash that each reached many kilometers above the volcano. As long as these columns stayed vertical, people on the ground remained safely out of their way. But after many hours, each column eventually collapsed into a pyroclastic flow that raced down the Vesuvius’ slopes. The first pyroclastic flow buried Herculaneum, and several subsequent ones buried Pompeii.

My study marked the first time pyroclastic flows had been reconstructed through an urban area, and it involved mapping the paths of phyroclastic flows through Pompeii as well as identifying flow velocities, temperatures and densities at various locations in the city.

This information is important because the more we know about how pyroclastic flows behave, the better equipped we will be to help people survive them in the future.

To map the flows, I analyzed the structure of rock and ash deposits left behind by them, and conducted laboratory tests of roof tiles, house beams and even human bones that had been torn away by the flows.

After earning my Ph.D., I became a researcher at the University of Hawaii in 2001. With funding from the National Science Foundation, I am currently working with Dr. Bruce Houghton of the University of Hawaii as well as Thomas Shea, a Ph.D. student, and Natalie Yacos, a recent college graduate, on a new study aimed at explaining why Vesuvius’ vertical gas and ash columns collapsed into pyroclastic flows during the 79 AD eruption.

We believe that the explanation may be found in the processes that were occurring in the volcano’s throat as magma was rising to the surface while the columns were still vertical.

To learn more about these processes, I am currently studying the shape, sizes and chemical composition of tiny bubbles and crystals in the volcano’s rocks and ash. Because these features are determined by processes that occur before magma reaches the surface and solidifies into rock, they can serve as windows into the volcano’s depths.

I am also conducting laboratory tests with Dr. Jessica Larsen of the University of Alaska, Fairbanks that involve subjecting samples of rocks created during the eruption to high temperatures and pressures. We will thereby create a micro simulation of what happened inside Vesuvius as it erupted.

I continue to be fascinated (although some call me obsessed) by Vesuvius because the more we learn about how it works, the better able we will be to predict its eruptions and protect people from them. Moreover, what we learn about this mercurial mountain will likely apply to many other volcanoes as well.