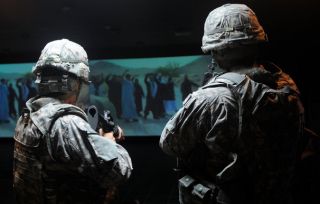 Today's security cameras and drones can help humans match faces against most-wanted lists and spot suspected enemies on the battlefield. Tomorrow's electronic eyes might automatically detect a suspect's age, ethnicity and gender simply based on the person's size, shape or behavior — or even figure out if the suspect is carrying a weapon or suicide bomber vest.

The futuristic vision for cameras comes from the U.S. Air Force Research Laboratory's new wish list for its human measurement and signatures intelligence (human MASINT) program. The Air Force lab wants to use human "biosignatures" such as body size, shape and motion to sense whether a person represents a threat. Such biosignatures could reveal anyone from a terrorist smuggling a bomb to a prisoner trying to escape in shackles.

That would allow the U.S. military to detect and track terrorists from airborne drones, as well as possibly prevent "friendly fire" accidents that kill U.S. soldiers. It could also help recognize noncombatant civilians — a special concern when dealing with insurgents or guerilla fighters who blend into the crowds.

Military researchers must first understand the baseline for human biosignatures so that they can profile a person caught on camera. For instance, biosignatures related to gestures or behaviors might give clues to a person's ethnicity, social role in a group, or possibly nationality.

As part of the effort, the Air Force also wants a 3D virtual avatar that can mimic human biosignatures. Having such an avatar could help to train either human analysts or automated human recognition software when working with simulations.

The Air Force first hopes to give such capability to military drones and ground systems supporting U.S. Special Forces. But if successful, there is no reason such technology could not someday expand to police and civilian security camera systems — and it might even help end the traveler's nightmare of long airport security lines.