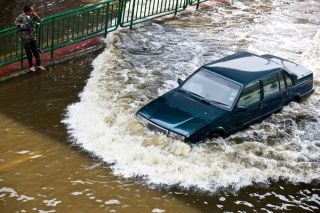 Heavy rains and flooding carry significant risks to people and their homes, but you may not be aware of some of the biggest flood hazards, according to a new report.

The most overlooked health risk is drowning while attempting to drive through a rising waters, says the report released today by the Union of Concerned Scientists. In 2010, 44 percent of deaths from U.S. floods occurred in vehicles.

Another largely hidden risk is that of waterborne disease. Heavy rains can contaminate drinking water with sewage, petroleum products, pesticides, herbicides, and waste from farm animals, according to the report. Floodwaters may contain more than 100 types of disease-causing bacteria, viruses and parasites.

A new study by researchers at the Children's Hospital of Wisconsin found that, between 2002 and 2007, there was an 11 percent increase in gastrointestinal cases at the hospital within four days of heavy rains.

"Damage from floods is typically measured in terms of lives lost and the cost of damage to buildings and infrastructure," said Liz Perera, a public health analyst for the Union of Concerned Scientists. "But what are often overlooked are the potentially costly public health impacts."

Moreover, because of climate change, heavy rainfalls are likely to become more common, according to the report. Over the last five decades, the number of very heavy rains has increased in the United States by more than 30 percent. This happens because warm air holds more water vapor, allowing for more intense rainfalls when it does rain, the report says.

Other hidden risks of floods include the growth of toxic mold in homes after water damage, contamination of recreational water including lakes and beaches, and sewage backing up into basements after local sewage lines and skeptic tanks overflow.

Dr. Marc Gorelick, division chief of pediatric emergency room medicine at the Children's Hospital of Wisconsin and an author of the report, said today at a news conference that he advises people not to drink untreated tap water the day after a heavy rain. People can store tap water before it rains, buy bottled water or use a filter to treat their tap water for that day, Gorelick said.

Pass it on:  Significant health risks of floods may be overlooked.