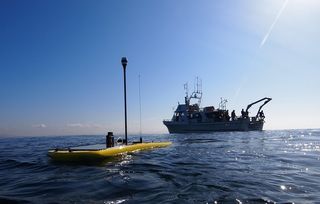 A group of wave gliders set a new distance record by traveling from San Francisco to Hawaii.
(Image: © Liquid Robotics)

Oceangoing robots have broken a distance record by reaching Hawaii from San Francisco, braving 26-foot waves and gale force storms along the way.

The four wave gliders made by Liquid Robotics traveled more than 3,200 nautical miles on the first leg of their 9,000-mile journey across the Pacific. Their arrival on the big island of Hawaii four months after leaving the West Coast shattered the Guinness World Records mark of 2,500 miles for the longest distance traveled by unmanned wave power vehicles.

"We are proud our PacX Wave Gliders have reached their first destination and broken the world record," said Edward Lu, chief of innovative applications at Liquid Robotics, which is based in Sunnyvale, Calif. "PacX represents a new model for providing widespread and easy access to environmental monitoring of the world's oceans, one in which Liquid Robotics operates fleets of mobile, autonomous ocean robots across previously inaccessible areas."

Each of the four drones consists of an underwater glider connected by a cable to a floating section. The wave gliders convert the endless motion of the ocean's waves into forward thrust, which would allow them to travel thousands of miles without fuel during yearlong missions.

The Hawaii stopover allows the wave gliders to get a checkup before setting out for their final destinations. One pair of wave gliders will cross the Mariana Trench — the deepest place on Earth — on its way to Japan. A second pair will cross the equator as it heads for Australia.

If all goes well, the underwater drones could reach their destinations by late 2012 or early 2013.

Such wave gliders represent a new generation of robots capable of monitoring hugely significant  changes in Earth's oceans, including acidification, shrinking fisheries and natural disasters such as tsunamis.