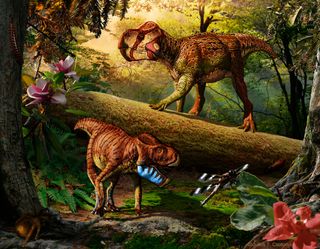 The oldest and smallest horned dinosaur in North America finally gets a name after decades of research.

The new study, published in the journal Cretaceous Research on Jan 24, also details another newly named species of horned dinosaur: Unescopceratops koppelhusae, which lived 75 million years ago, in what is now Alberta, Canada.

"These dinosaurs fill important gaps in the evolutionary history of small-bodied horned dinosaurs that lack the large horns and frills of relatives like Triceratops from North America," study researcher Michael Ryan, curator at The Cleveland Museum of Natural History, said in a statement. "Although horned dinosaurs originated in Asia, our analysis suggests that leptoceratopsids [which includes these horned dinosaurs] radiated to North America and diversified here, since the new species, Gryphoceratops, is the earliest record of the group on this continent."

The first jaw fragment of U. Koppelhusae was discovered in Dinosaur Provincial Park in 1995, but has just recently gotten a name; the other, G. morrisoni, was first discovered in 1950, but remained unnamed until recently. [Images of 'Triceratops' Ancestors]

The duo was much smaller than their larger Triceratops and Torosaurus relatives: U. koppelhusae measured about 6.5 feet (about 2 m) in length and weighed less than 200 pounds (91 kilograms). The researchers consider the other newbie, G. morrisoni, the smallest horned dinosaur in North America and one of the smallest plant-eating dinosaurs known.

Study researcher David Evans, associate curator at the Royal Ontario Museum said in a statement: "Small-bodied dinosaurs are typically poorly represented in the fossil record, which is why fragmentary remains like these new leptoceratopsids can make a big contribution to our understanding of dinosaur ecology and evolution."