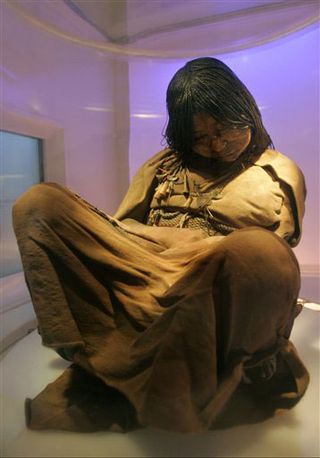 The Incans made sure that certain children ate well-before feeding them to the gods. Researchers analyzed hair samples of frozen child mummies and found that potato-fed peasant kids were treated to delicacies like maize and dried llama meat right before being sacrificed. Some of the children were as young as six years old.

Incan children as young as 6 were “fattened up” prior to their sacrificial deaths, a new study shows.

Researchers made the startling discovery by sampling the hair of frozen child mummies found high in the Andes mountains, near the summit of Mount Llullaillaco—a 22,100-foot (6,739-meter) active volcano on the border of Argentina and Chile.

"By examining hair samples from these unfortunate children, a chilling story has started to emerge of how the children were 'fattened up' for sacrifice," says Andrew Wilson, an archaeologist at the University of Bradford in the U.K.

Based on measuring natural radioactive isotopes in the hair samples, the archaeologists found that the kids were normally fed diets of "common" vegetables such as potatoes, suggesting that they came from a peasant background. A year before their intentional demise, however, the isotopes showed that their diets were enriched with "elite" food like maize and dried llama meat.

"Given the surprising change in their diets, and the symbolic cutting of their hair, it appears that various events were staged in which the status of the children was raised," Wilson said. "In effect, their countdown to sacrifice had begun some considerable time prior to death."

How the children perished remains a mystery, but Wilson and his team think they were led into the mountains about three to four months before dying. During this time, the researchers found maize beer and coca leaf molecules in the mummies' hair samples.

"It looks to us as though the children were led up to the summit shrine in the culmination of a year-long rite, drugged and then left to succumb to exposure," said Timothy Taylor, also an archaeologist at the University of Bradford. He noted that while the deaths may seem grim, they occurred more than 500 years ago when Incan rulers controlled small mountain communities.

The Llullaillaco Boy, however, probably met the most terrifying end: His clothes were covered in diarrhea and vomit, in which archeologists found traces of a hallucinogenic drug called achiote. But he probably didn't perish from the drug—he was bound in a cloth wrapping drawn so tight that his ribs were crushed and his pelvis dislocated, indicating he may have suffocated to death.

The findings of the mummified hair samples are detailed in the Oct. 1 issue of the Proceedings of the National Academy of Sciences. Wellcome Trust, a U.K.-based medical charity, funded the research.