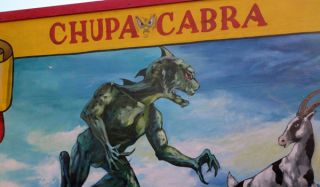 Artistic renderings often depict it as having blue-hued skin, a forked tongue, claws, red eyes, protruding fangs and a spiky patch of hair running down its back.
(Image: © joanna8555/flickr)

It was only a matter of time: Another chupacabra sighting has been reported in Latin America.

The blood-sucking chupacabras, much like the cats they are sometimes said to feed upon, seem to have nine lives. Despite being more or less definitively disproven in recent years, people continue to report seeing the beast — most recently in the early morning hours of March 1 in the Mexican state of Michoacán, when a rancher reported that 35 sheep were killed in their enclosure. [Video - Warning: Graphic Content]

Though details are (as always) sketchy, video of the scene shows many of the animals dead or dying, and the bloody throat of one sheep in particular appears to be cut or torn out. The bodies reportedly had tooth marks and claw marks, and an eyewitness described the mysterious attacker as having fangs, claws and wings. (He didn't explain why he couldn't get a better description of it, nor why it was able to kill three dozen animals before he noticed it.) Perhaps significantly, the sheep enclosure also contained cows and horses that were not attacked.

People have searched for the chupacabra since the mid-1990s, and come up with no hard evidence. As I revealed in my book"Tracking the Chupacabra: The Vampire Beast in Fact, Fiction, and Folklore," the original chupacabra report was inspired by the 1995 sci-fi thriller "Species," casting considerable doubt on its validity. More recent "chupacabra" carcasses found in Texas and elsewhere have been revealed through DNA tests to be mangy dogs and coyotes.

With so much evidence against their existence, why do chupacabra reports persist? Part of the reason is that, like Bigfoot and the Loch Ness Monster, belief in the chupacabra is not proportional to the evidence for it. For many people, a large footprint, a blurry photograph, or a dead sheep is all the proof they need. [Is It Ok to Shoot Bigfoot?]

Another reason chupacabra stories aren't going away is that many myths feed the mystery. For example, one of the most common claims about the chupacabra is that its victims are found completely drained of blood — often "every drop" is said to be gone. The truth is that they are not; there are no vampiric animals that completely drain their victims of blood: not mosquitoes, not leeches, not vampire bats, nor any another animal.

It is logistically impossible for an animal to drain every last drop of blood from another animal (especially from a medium-size mammal like a sheep). It simply cannot be done; there is blood throughout the heart, veins, arteries, blood vessels, and elsewhere, and removing all (or even most of) the blood would require a skilled medical procedure. When suspected chupacabra victims have been autopsied, invariably they are revealed to contain plenty of blood.

Of course, this casts doubt on the identity of the attacker; if the bodies were not actually drained of blood, then there's no reason to invoke a vampiric monster. Chupacabra reports are an identification of exclusion; it's a label for when someone doesn't know what else to call it. When someone doesn't know what attacked an animal, or can't identify some strange creature they saw they simply call it a chupacabra.

So what is attacking animals, if not the dreaded chupacabra? Sometimes the simplest answer is the correct one: ordinary animals, mostly dogs and coyotes. These animals instinctually go for a victim's neck, and their canine teeth leave puncture wounds that could be mistaken for vampire bite marks. In the case of the sheep attack in Mexico, a feral dog or coyote would also explain why the cows and horses were left alone: they ignored the larger, more dangerous animals and instead attacked the smaller and weaker sheep.

Chupacabras will continue to be reported whether the creatures exist or not for the simple reason that people love mysteries. Think of it this way: eyewitnesses reported seeing both Elvis and Hitler alive years after they died – but at least we know they existed.

This article was provided by Life's Little Mysteries, a sister site to LiveScience. Benjamin Radford is deputy editor of Skeptical Inquirer science magazine and author of six books including Scientific Paranormal Investigation: How to Solve Unexplained Mysteries. His Web site is www.BenjaminRadford.com.