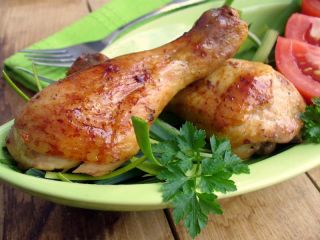 Fear not the dark side. Dark meat in poultry is healthier than you might think, according to a new study by researchers at the New York University School of Medicine.

Many U.S. doctors recommend eating white or light meat instead of dark meat because it is lower in saturated fat. While this much is indisputable, the NYU study demonstrates how dark meat ultimately might pack a stronger nutritional punch.

The study appears online in the European Journal of Nutrition.

Not simply black and white

Taurine is a nutrient known to aid in anti-inflammation, blood pressure regulation, healthy nerve function, the production of bile acid, which breaks down fat, and other important functions.

A team led by Yu Chen of the NYU Langone Medical Center tapped into the ongoing NYU Women's Health Study to evaluate the association between taurine levels in the blood and risk of coronary heart disease, a leading killer. The group examined blood samples and diet information from about 500 women, split about evenly between those with no history of heart disease and those who developed heart disease during the study period from 1986 to 2006. [10 Leading Causes of Death]

For most women, high taurine levels seemed to offer no major heart benefit. But in the subset of those subjects with high cholesterol, women with high levels of taurine reduced their risk of heart disease by 60 percent.

The high taurine levels were associated with eating dark meat poultry, although the nutrient also is found in shellfish such as clams and oysters.

The skinny on white meat

Dark meat gets its color from myoglobin, a compound that muscles use to transport oxygen to fuel activity. Domesticated chickens and turkeys are flightless and only walk, so their leg meat is darker than their breast and wing meat. Ducks and geese fly and walk, so most of their meat is dark.

White meat has about half the saturated fat of dark meat, and for this reason alone it has been pushed as the healthier alternative. But white meat is largely a protein delivery system; dark meat contains many more nutrients. In addition to taurine, dark meat is far richer in minerals such as iron, zinc and selenium, as well as vitamins A, K and the B complex — B1 (thiamine), B2 (riboflavin), B3 (niacin) B6, B9 (folate) and B12 (cobalamin).

White meat tends to be slim on taste, too. Compensating for its comparative dryness with mayonnaise or gravy adds more saturated fat than dark meat contains. Nevertheless, Americans on average prefer white meat, and most dark meat from large U.S. farms is exported to Europe and Asia. These regions eat considerably more duck and other fowl, too.

If larger studies support the NYU finding, dark meat soon might be vindicated as a healthy meat, particularly for those with high cholesterol, Chen said.

Those on a strict vegan diet devoid of all animal products may have difficulty consuming meaningful levels of taurine and may need to take a natural supplement. The body can make taurine from vitamin B6 and cysteine, an amino acid; but cysteine, too, is primarily found in animal products. A precursor to cysteine, called methionine, is found in some plant seeds.

Many energy drinks have high levels of taurine — more than 1,000 mg, or 10 times that of a serving of dark meat. Chen warns, however, that this is synthetic taurine. These high levels and the synthetic nature have not been tested, she said, and thus one cannot assume the synthetic version can be a substitute for natural, diet-based taurine. These drinks are also chockfull of caffeine and sugar.