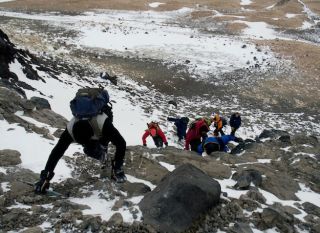 Visitors climb a rocky slope in Antarctica. Tourists and scientists are unknowingly bringing with them invading species that can disrupt the continent's pristine environment.
(Image: © Image courtesy of Aleks Terauds.)

Although invasive insects, plants and animals have already taken root on islands near Antarctica, it wasn't entirely clear what risk outside species posed to the continent itself — typically a more formidable environment, and therefore one that is far more pristine, since only the hardiest organisms can survive there.

So a group of scientists decided to find out. Their study, which found that invasive, alien plants are finding their way to the bottom of the world, is published this week in the journal Proceedings of the National Academy of Sciences.

"We asked a simple question — can non-indigenous species make it in Antarctica, and if so, where?" said lead author Steven L. Chown, a professor at South Africa's Stellenbosch University, and director of its Center for Invasion Biology.

To help answer that question, scientists needed to seek out any seeds that visitors were inadvertently carrying to Antarctica. The Antarctic Treaty essentially forbids the deliberate introduction of foreign species to the continent, so any interlopers are likely arriving by accident.

But how to find these tiny stowaways? A vacuum cleaner, of course.

Researchers vacuumed the clothing and baggage of nearly 1,000 volunteers — tourists, workers and scientists alike — who visited Antarctic during the 2007-2008 field season.

"They were not wearing the gear at the time," Chown told OurAmazingPlanet in an email. "Often they were amazed at what they had left in their pockets and had missed for some time."

Scientists painstakingly sorted through the pocket fluff and candy wrappers collected, and found more than 2,800 seeds — on average, about 9.5 seeds per tourist, far more for scientists. The team also identified what family the inchoate plants belonged to in nearly 90 percent of the seeds collected.

Chown said that not only was it surprising just how many seeds were making it to Antarctica, but that "so many of them are from cold climate areas such as the sub-Antarctic and Arctic," making it far more likely they'll be able to establish themselves on the Antarctic continent.

Indeed, he said, perhaps the most surprising thing the research revealed is that an alien plant — Poa annua, an annual grass common across the United States and one often treated as a weed — has already invaded the Antarctic Peninsula, the long finger of land that points toward South America.

The region is one of the most swiftly warming places on Earth — the area around the peninsula has warmed by about 4 degrees Fahrenheit (2.2 degrees Celsius) over the last five decades. It has been the site of catastrophic ice-shelf collapses in recent years, and is the area of Antarctica the study identified as most vulnerable to biological invaders.

"In the future, other ice-free areas will also be at risk as global climate change continues to impact the Antarctic," Chown said.