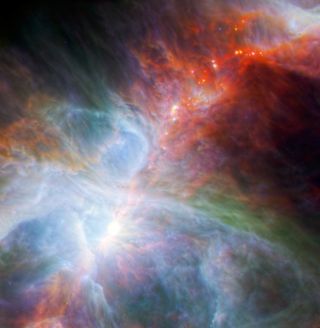 Astronomers have spotted a swarm of young stars in the famous Orion nebula in the midst of their growing pains — a turbulent phase when the fledgling stars mature into adulthood.

Using NASA's Spitzer Space Telescope and the European Space Agency's Herschel Space Observatory, the researchers observed the developing stars rapidly heating up and cooling down as they grow into adult stars.

In the new Orion nebula photo, the bright specks of stars are awash in rainbow colors that represent different wavelengths of infrared light. This stunning view of the well-known stellar nursery, which is located 1,350 light-years from Earth, helps astronomers piece together the process of star formation.

In the image, the sensitive infrared instruments of Spitzer and Herschel reveal budding stars that would otherwise remain hidden behind thick veils of gas and dust to visible-light telescopes. These stars are in the very early stages of stellar evolution, NASA scientists explained in a statement.

Stars are born as clumps of gas and dust collapse into balls of material surrounded by rotating gaseous disks that feed material to the newborns. Over several hundred thousand years, some of these developing stars siphon enough material to trigger nuclear fusion at their cores and become a star. [50 Fabulous Nebula Photos]

Spitzer is designed to see shorter infrared wavelengths than Herschel, so by combining data from both spacecraft, astronomers can gain a more complete understanding of how the young stars are behaving in the Orion nebula.

Herschel surveyed this portion of the sky once a week for six weeks in 2011, monitoring the activity of young stars. The observatory examined long infrared wavelengths of light that trace cold dust particles, while Spitzer probed the warmer dust at shorter infrared wavelengths, NASA officials said.

Astronomers noticed that several of the young stars brightened and dimmed by more than 20 percent over only a few weeks. Since the twinkling comes from cool material emitting infrared light, this material must be far from the hot center of the young star, NASA scientists said.

At such great distances, the material should take years, or even centuries, to spiral near the young star and cause the twinkling, rather than weeks.

Astronomers are investigating whether lumpy filaments of gas could be funneling in from the outer to the central regions of the star, warming it as the clumps hit the inner disk. Or, material could be gathering at the inner edge of the disk and casting a shadow on the outer part, they said.

"Herschel's exquisite sensitivity opens up new possibilities for astronomers to study star formation, and we are very excited to have witnessed short-term variability in Orion protostars," Nicolas Billot, astronomer at the Institut de Radioastronomie Millimétrique in Grenada, Spain, said in a statement.

Billot and his colleagues are preparing a paper on the findings of their study.

"Follow-up observations with Herschel will help us identify the physical processes responsible for the variability," he added.