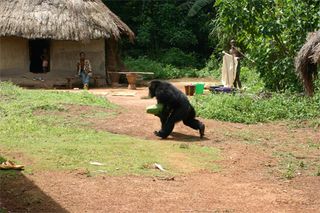 Male chimps apparently can win over the opposite sex with the aid of fruit stolen from nearby farms and orchards.

"The male chimpanzees appear to be showing off and trading their forbidden fruit for other currencies—that is, food for sex," said primatologist Kimberley Hockings at the University of Stirling in Scotland.

The discovery could shed light on the evolution of the sharing of food and more complex behaviors among humans, Hockings added

Over the course of a year, Hockings and her colleagues investigated how wild chimpanzees coexisted with people at the West African village of Bossou in the Republic of Guinea.

"The chimpanzees are held as the ancestors of the Manon people at Bossou. They're the totem of the village, so people don't kill them," Hockings told LiveScience.

The scientists discovered males usually shared the spoils of their raids with nubile females.

"We believe the males may be using crop raids as a way to advertise their prowess to other group members, especially the opposite sex," Hockings explained. "Daring behavior certainly seems to be an attractive trait, and possessing a sought-after food item, such as papaya, appears to draw even more positive attention from the females."

Males especially chose to share food with a preferred female, one who took part in the most "consortships"—where she spent time alone with a male so he got an exclusive chance at sex.

"The male who shared the most food with this female engaged in more consortships with her and received more grooming from her than the other males, even the alpha male," Hockings said.

These findings could shed light on how the sharing of food and more complex behaviors developed among the ancestors of humans .

"Sharing of food is such a fundamental behavior in humans. We take it for granted that we have food-sharing between unrelated people, different families," Hockings said. "Maybe there was a tradeoff that went on with early humans as well, with risk and effort paying off as a social tool for nurturing alliances or other bonds. That could have then led to division of labor, with tasks divided off and the proceeds of work are then shared."

Although the chimpanzees and their crop raids are tolerated at Bossou, Hockings cautioned other chimps are not as privileged, noting that chimpanzees have declined in the wild worldwide by more than 66 percent over the past 30 years, to a mere 200,000.

"I don't want to just present a story of how happy little chimps live near humans—not all chimpanzee communities live like this in harmony with people," Hockings said. "There's a lot we can still learn from chimps and how they can coexist with people, and a solution to their decline can help both people and chimpanzees."

Hockings and her colleagues detailed their findings online Aug. 12 in the journal PLoS ONE.