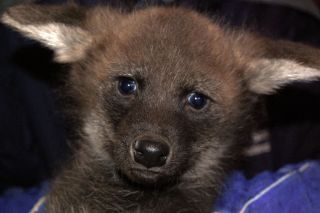 A litter of fuzzy little maned wolf pups born at a conservation center in Virginia have gotten their first checkup, revealing the adorable animals' sex for the first time.

The verdict? It's a boy, and a boy, and a girl, and a girl! At least, veterinarians are relatively convinced that the litter of four contains two of each sex; they'll have to confirm later, when the pups are older and their sex more obvious.

The four maned wolf pups were born Jan. 5 at the Smithsonian Conservation Biology Institute (SCBI) in Front Royal, Va. These South American wolves are listed as "near threatened" in the wild by the International Union for Conservation of Nature, largely because humans are encroaching on wolf habitat. As adults, maned wolves have thick fur on their necks, giving them their name. [See pictures of the pups]

Breeding the wolves in captivity is tricky, perhaps because captive diets do not replicate wild diets for these animals. The parents of the four new pups, Salina and Nopal, are on a special diet formulated to more closely represent the omnivorous chow of maned wolves in the wild.

At a routine checkup on Thursday (Feb. 16), veterinarians gave the new pups their first vaccinations. Each little wolf weighed in between 4 and 5 pounds (1.8 and 2.3 kilograms).

"All of the pups were bright, appeared in good health and are starting to get just a bit feisty," SCBI veterinary technician Lisa Ware said in a statement.

The pups will get their next round of vaccinations in three weeks. SCBI scientists hope the animals will eventually grow up to breed, increasing the genetic diversity of captive maned wolves and helping to maintain a self-sustaining population of this threatened animal.