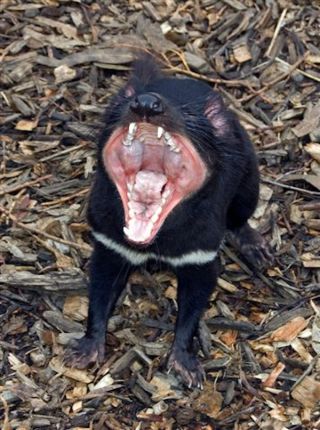 Tasmanian devils are in danger of dying off because of a deadly, transmissible cancer.
(Image: © Save the Tasmanian Devil Program)

About 20 years ago, a female Tasmanian devil living in northeast Tasmania developed a facial tumor. When she eventually died, she left some of her cancer cells behind. Her tumor lived on to kill another day, and has been sweeping through the endangered Tasmanian devil population ever since.

The "immortal devil girl" was identified in a new study in which researchers sequenced the genetic blueprint, or genomes, of the Tasmanian devil's cancerous facial tumors.

"It’s a very bizarre cancer; it's spread by living cancer cells," study researcher Elizabeth Murchison, working with the Wellcome Trust Sanger Institute in the United Kingdom, told LiveScience. "The contagious cancer has arisen from the cells of a single girl devil that lived quite some time ago. We don't have genetic material from that devil, because it lived and died in the wild and was probably never seen by a person."[Photos of Tasmanian Devils]

These tumors are very special: They are spread through bites. An infected devil bites another devil and loses some cancer cells in the process. The result was clones of the she-devil's cancer hopping from one individual to another, which is a rarity in cancers. Somehow, the cells are able to take up residence in the newly infected devil without alerting its immune system of their presence.

The cancer has spread to most of the devil populations in Tasmania, though some are kept safe in captivity. It kills relatively quickly, within a few months, and veterinarians have no treatments for it. At the rate it is spreading and killing these marsupials, it could destroy the Tasmanian devil population within the next 30 years, scientists estimate.

The researchers took 104 samples from tumors from different areas of Tasmania. They sequenced their genomes and compared them with the previously sequenced Tasmanian devil genome. Their analysis suggested the cancer first emerged relatively recently in a single female Tasmanian devil. They also found that some of the tumor's immunity genes were mutated, which could be how it infects devils without alarm bells going off.

Overall, however, only 17,000 genes in the tumor were mutated (modified from the original cancer cells), a smaller number than expected. "We were surprised to find there were relatively few mutations, which indicates that genetic stability is required for a cancer to be transmissible."

Knowing more about the cancer can help researchers design drugs and vaccines to help slow the outbreak.

The study was published today (Feb. 16) in the journal Cell.