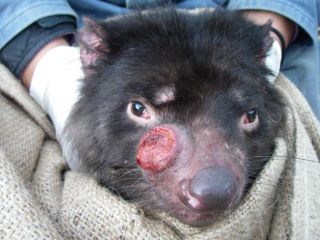 For Tasmanian devils, the infectious cancer first shows up in and around the mouth as small lesions or lumps. These lesions grow into large tumors around the face and neck (and sometimes even in other parts of the body).
(Image: © Rodrigo K. Hamede.)

For Tasmanian devils, one bad apple not only spoils the group, but could kill it off.

New research reveals each member of a social network of Tasmanian devils comes into contact with every other member, either directly or through an intermediate individual (think "middle man"). The common contact could mean the rapid-fire spread of an infectious cancer from a single infected devil.

The study will be published in the journal Ecology Letters.

The Tasmanian devil (Sarcophilus harrisii) resides only on the island of Tasmania, which sits about 150 miles (240 km) south of Australia. Fossil evidence suggests the furry marsupials, known for their disturbing screeches, once dotted the landscape of the Australian mainland before going extinct there some 400 years ago.

Now, their existence on this last bit of land is threatened by so-called devil facial tumor disease, which is likely spread through biting. The cancer causes facial lesions and can kill the animal within months of the first tumor appearing. Experts predict the disease could wipe out the remaining devil population within 20 years.

To find out who is bumping up against whom (and spreading germs), Rodrigo Hamede of the University of Tasmania and his colleagues attached radio collars to 46 adult devils (evenly split between males and females) in Narawntapu National Parl, an area in northern Tasmania supporting a disease-free devil population. The collars logged when and for how long any two Tasmanian devils came within about a foot (30 cm) or less of each other, a range that allowed the animals to physically bite and touch each other.

Collar logs from 27 devils were retrieved and revealed all individuals were connected to all other individuals, either directly or via an intermediate devil. A 3-year-old male seemed to be Mr. Popular, as he had the greatest connections with other devils, either as an intermediary or through direct contact.

"Understanding networks of contacts is crucial, because it is usually the case that a small number of highly connected individuals, or 'super spreaders,' are responsible for the majority of disease transmission," Hamede said. "Once these individuals are identified, actions such as targeted treatment or culling may control the disease."

However, Hamede's analysis didn't show any other highly-connected individuals. The social network did show contact between female devils was more common than male-male interactions. The researchers suggest male devils made efforts to avoid each other.

While Hamede and others are still looking for answers to the cancer plaguing this carnivore, past research suggests Mother Nature is helping out. The tumors mainly affect adults at least 2 years old, which is the typical age at which the animals can start to reproduce. But now it seems they are breeding at younger ages.