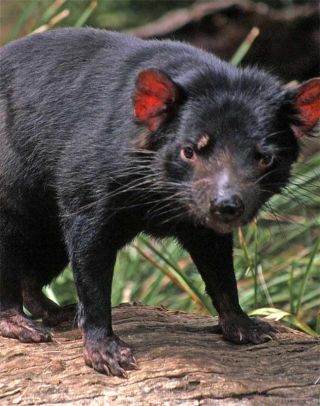 All it takes is a bite for a Tasmanian devil to pass a lethal cancer on to its kin. Now scientists have figured out the origin of the transmissible facial tumor disease that's wiping the creatures out: nerve cells.

The finding, which was based on genetic testing of the cancerous tumors, could lead to diagnostic tests, treatments and vaccines for the disease, which are currently unavailable.

"Our findings represent a big step forward in the race to save the devils from extinction," said lead researcher Elizabeth Murchison of Cold Spring Harbor Laboratory (CSHL) in New York and the Australian National University.

By diagnosing those with the facial cancer, called devil facial tumor disease (DFTD), scientists would be able to isolate the animals before they infect others. That's important for their survival, as past research has shown that the animals mingle quite a bit, meaning lots of chances for physical contact and spread of cancer cells.

The Tasmanian devil (Sarcophilus harrisii) resides only on the island of Tasmania, which sits about 150 miles (240 km) south of Australia. Fossil evidence suggests the furry marsupials, known for their disturbing screeches, once dotted the Australian mainland before going extinct there some 400 years ago.

In the last decade, their numbers have dropped by about 60 percent on Tasmania due to DFTD, which is likely spread through biting and other physical contact. (The only other known infectious cancer spread in this way occurs in dogs and is called canine transmissible venereal tumor.)

The DFTD causes facial lesions and can kill the animal within months of the first tumor appearing. Experts predict the disease could wipe out the remaining devil population within 25 years or so.

Murchison and her colleagues analyzed the genetic material taken from these tumors and other tissues on those affected and unaffected devils. Results showed the facial tumors were genetically identical to one another but distinct from other tissues and other types of tumors.

The team found the tumor genes were most similar to Schwann cells, a type of tissue that cushions and protects nerve fibers.

Based on these findings, the scientists identified a genetic marker to accurately diagnose the facial cancers. Next, the team hopes to figure out how the nervous-system cells spawn the facial cancer.

"Now that we've taken a good look at the tumors' genetic profile, we can start hunting for genes and pathways involved in tumor formation," said study researcher Greg Hannon of CSHL and the Howard Hughes Medical Institute.

The research, which will be detailed in the Jan. 1 issue of the journal Science, was supported by the National Health and Medical Research Council and the University of Tasmania's Dr. Eric Guiler Tasmanian Devil Research Grant.