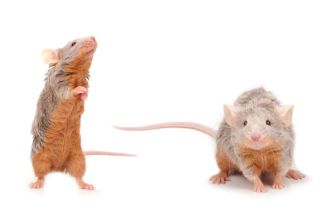 Men are from Mars and women are from Venus, but how did they get there? Our gender differences might be a function of how our brains react to hormones, a new study on mice suggests.

The study showed that when different sex hormones were turned on or off genes in the brain, the mice showed different parenting behaviors.

Though the research was performed in mice, these sex hormones show similar effects in mammals and many of the genes the scientists discovered are found in humans, the researchers say. It's possible that hormones are having an effect on brain genes in humans, too, though the behaviors controlled might be different.

"Testosterone and estrogen control sexually dimorphic behaviors in vertebrate species, we've known that for a long time that they control behaviors at a very large-scale level," study researcher Nirao Shah, of the University of California, San Francisco, told LiveScience. "What we've discovered are [some of] the gene networks that are regulated by these sex hormones."

The researchers focused on the hypothalamus, a specific region of the adult mouse brain that is involved in mating and parenting behaviors, like courtship, nursing and defending pups. They looked to see what genes were being turned on and off in this region by the presence of sex hormones, such as testosterone, estrogen and progesterone.

They found 16 genes that showed clear sex differences. The researchers then studied four sets of mice that were missing one of these hormone-reactive genes (Brs3, Cckar, Irs4 and Sytl4) to see how their behaviors might change. The mice all looked normal, but when the researchers studied specific mating and parenting behaviors they found that the mice all had slightly different quirks. [The Animal Kingdom's Most Devoted Dads]

"In each one of these mutants we found deficits in one or another behavior, but everything else appeared untouched, it was normal and looked like the controls did," Shah said. "The larger implication of this is that you can take a complex social interaction like mating or fighting and you can sort of break it down into genetically controlled elements of that behavior."

Male mice missing the Tytl4 gene had subtle changes in the pattern of their mating behaviors — they performed their courtship displays in a different order than normal mice, though they still behaved like males and were able to impregnate females. The other gene they discovered, Brsr3, also controlled male mating behaviors: Males missing the gene initiated sex faster with females and were faster to start fights with other males. [10 Surprising Sex Statistics]

The researchers are looking at the rest of the 16 genes they discovered to determine if they are also regulating certain behaviors. "I suspect there are many more genes like this that are going to be discovered," Shah said.

Knowing that genes controlled by sex hormones can have impacts on behavior, Shah says in humans this could help explain why some mental disorders, such as ADHD or autism, affect one sex over the other. "With the genes we've identified that are involved in setting up male and female sex dimorphism in the mouse brain," Shah said, "we can see how the brains could be differentially vulnerable to disease conditions."

Scientists can't be sure yet how these specific genes will translate to humans, but Shah suspects there may be hormone-gene interactions in the human brain. Hormone-controlled brain genes could play a role in behavior in humans, but we really don't know what behaivors might be controlled, since human sex and mouse sex are so different.

"There are efforts under way to look at gene expression in the human brain, but we don't know what that's going to look like yet," Shah said. "At least with animals we can say, yes, we can explain at least some of the variation and we can at least now begin to think about genetic explanations for some differences in social behaviors."

The study will be published today (Feb. 2) in the journal Cell.