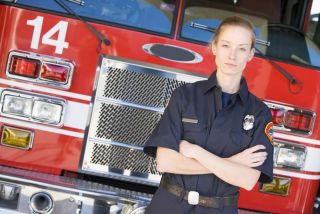 Women with high levels of a male sex hormone were more likely than others to choose hands-on jobs such as a firefighter rather than "people" jobs, such as a teacher.
(Image: © Monkey Business Images | Shutterstock)

Whether a girl grows up to be a firefighter, a scientist, an artist or a teacher may have its roots in the hormones she was exposed to as a fetus.

A new study of 125 individuals discovered that females exposed to high rates of a male hormone in their mother's uterus are more likely than other females to later be interested in jobs normally preferred by males, such as engineer or pilot.

A team of psychologists at Pennsylvania State University looked at the career interests of young men and women with congenital adrenal hyperplasia (CAH), a genetic condition in which the body produces high levels of the male hormone androgen. Although they are exposed to androgen while developing, females with CAH are genetically female and reared as females. Their career interests, however, tended to match those shown by males, both with and without CAH. They were less interested in jobs like social worker and teacher than other females. [See jobs chosen by women with and without CAH]

Berenbaum and her colleagues asked each participant, whose ages ranged from 9 to 26, to rank 64 jobs based on their like, dislike or indifference to. There were clear differences in how each group of participants — females and males with or without CAH — ranked certain jobs and types of jobs.

When the researchers grouped the jobs on a scale of whether they involved working more with people, such as a nurse or teacher, or working more with inanimate things, like a carpenter or chemist, the association became clear. Females with CAH, and males in both groups, expressed more interest in jobs working with things, whereas females without CAH preferred jobs working with people.

Understanding how this preference originates could help psychologists develop ways to encourage women without CAH to try out jobs in the science, technology, engineering and medicine (STEM) fields.

"This suggests that a way to encourage women to enter STEM fields is to show them how those jobs involve working with people," Berenbaum told LiveScience.

Hormones and the Brain

Even those not affected by CAH are exposed to varying levels of hormones during development, and previous studies have shown that this influences childhood behaviors, such as toy preferences. CAH is one extreme of the variance in hormones, but the trend seen in the new research likely holds true in the broader population, Berenbaum said.

The explanation for how hormones influence behavior all comes back to the brain. "The brain has to be mediating this," said Adriene Beltz, a Penn State graduate student who worked with Berenbaum on the research. "But that's something that's not easy to look at." New brain-scanning technologies, she said, will start to reveal the whole story.

The new research, which appears in the September 2011 issue of the journal Hormones and Behavior, looked at the career interests of relatively young individuals. Next, Berenbaum and Beltz are looking at an older population and testing whether the pattern holds true for actual career choices.