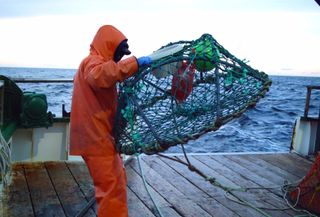 Ecologists may have captured the first deep-sea fish sounds, hidden among the sounds of dolphins and humpback, fin and pilot whales, they report in a new study.

More than 50 years ago, researchers hypothesized that sound production in deep-sea fish is common, based on the fact that many of the species have the anatomy needed to produce sound. Most fish make incidental noises as a byproduct of chewing and swimming, but for deep-sea fish, which live in perpetual darkness, communicative noises might be important for survival and reproduction.

"But just because they have the anatomy to make noises, doesn't mean they necessarily do it," said Rodney Rountree, a marine ecologist at the University of Massachusetts, Amherst. "In terms of communicative sounds, we don't know what proportion of the fish do it."

Few studies have ever reported recording possible deep-sea fish sounds, so scientists know little about these sounds, Rountree explained. It's not as simple as putting the fish in a tank and listening in on their conversations. "Deep-water fish are extremely difficult to keep alive in the lab, and the fish will not make a sound unless you can elicit the behavior tied to the sound," he told LiveScience. For example, you won't be able to hear their reproductive sounds unless you can get them to spawn in the laboratory, which they won't do unless the conditions are just right. [Video of Fish Calls]

Moreover, until now scientists have not pursued recording deep-sea fish in their natural habitat, mostly because of the lack of adequate, low-cost technology. "Our study was the first where we purposely went out and did that," Rountree said.

In collaboration with commercial fishermen, Rountree and his colleagues developed a simple deep-water hydrophone. With the device, they recorded 24 hours of deep-water sounds from the seafloor (about 2237 feet, or 862 meters, below the surface) of Welkers Canyon, which is south of New England's Georges Bank. From the recording, they were able to identify various sounds from whales and other cetaceans, but they also heard at least 12 other unique and unidentifiable sounds.

These mysterious grunts, drumming and duck-like calls could be from whales, but they could also have come from deep-sea fish. "Most fish only hear low frequencies and only produce low-frequency sounds," Rountree said. "The sounds we recorded were in the range that fish typically use."

If the sounds were indeed produced by deep-sea fish, the continued increases in man-made noise may prove to be problematic, Rountree said. The potential fish noises were just barely above the background noise, he said, "so if the background noise increases too high, it might mask the fish's sounds from each other."

Rountree and his team are now trying to develop a listening system that incorporates video, in hopes of identifying the creatures that made the enigmatic noises. However, the work has been difficult. "When we try to incorporate video, the price tag goes way up, because video requires light, and powering the light becomes a problem," Rountree said. "Right now we are still on the drawing board with trying to come up with a good way to do this."

They also hope to figure out the meaning behind the grunts and other calls.

The study appears in the new book, "Effects of Noise on Aquatic Life" (Springer, 2012).