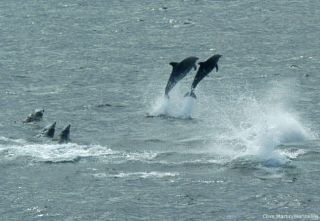 Animals know how to speak up, pipe down, cut to the chase or spin a long yarn in order to stand out amidst the din when it comes to communicating with peers, a new set of studies suggests.

A special August issue of the Journal of Comparative Psychology, published by the American Psychological Association, presents a host of studies that investigate the ways that animals adapt their calls, chirps, barks and whistles to their social situation.

The special issue reports on findings from the natural world such as:

* Male gray treefrogs (Hyla versicolor) give out longer but fewer calls in reaction to the calls of other males. In other words, when these frogs are chorusing full blast, a male seeking female attention will change the rhythm of his call to break out of the chorus.

* Using an array of microphones to identify individual callers among wild bottlenose dolphins (Tursiops truncates), scientists found that although dolphins whistle more in social situations, individuals decrease their vocal output in large groups, when their whistles are more likely to be drowned out.

* Carolina chickadees (Poecile carolinensis) in larger social groups use calls with greater information than do individuals in smaller groups, and female-male interactions in opposite-sex chickadee pairs reflect the rate of male production of that distinctive chick-a-dee call.

* Two different species of North American katydids synchronize calls within species, using somewhat different methods. Whereas the synchrony of N. spiza is a byproduct of signal competition between evenly matched males, that of N. nebrascensis seems to be an adaptation that allows cooperating males to make sure females can pick up critical features of their calls. These different routes to synchrony suggest different evolutionary paths that have led to the way that male katydids acoustically advertise their availability.

"Pooling data on vocal imitation, vocal convergence and compensation for noise suggests a wider [cross-species] distribution of vocal production learning among mammals than has been generally appreciated," Peter Tyack, a biologist at the Woods Hole Oceanographic Institution involved in one of the studies.

The results could mean that mammals have more of the neural underpinnings for learning to vocalize than has been previously thought.

"Animal communication has been a major emphasis in animal behavior and comparative psychology for many decades," said Gordon Burghardt of the University of Tennessee at Knoxville, who edits the journal. "However, in recent years, we have gone beyond the straightforward analysis of dyadic interactions between two individuals. We now consider the role of eavesdropping, deception and noisy environments in shaping signals and investigate how animals deploy them in various contexts."