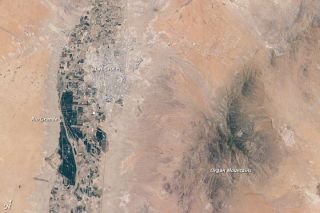 The city of Las Cruces is located within the Rio Grande Rift, a large geological feature that extends from Colorado southwards into Mexico. The Rio Grande Rift is marked by a series of depressions (known as graben) punctuated with uplifted mountains. The grabens form when blocks of the Earth’s crust sink as geologic forces pull the crust apart along fault lines. Sinking in one place is often accompanied by uplift along boundaries of the grabens—the striking Organ Mountains to the east of Las Cruces are one such uplifted fault block.
(Image: © NASA.)

The U.S. Southwest isn't particularly known for its seismic activity, but the Rio Grande Rift, a series of faults and basins that runs from central Colorado south through New Mexico, is alive and stretching, new research shows.

Scientists had suspected the rift might be dead, but measurements of its movement varied widely and were riddled with uncertainties. Now, thanks to state-of-the-art GPS technology, geophysicists have found the rift is indeed extending — just very slowly.

And of course, anytime a large chunk of the Earth's crust moves, the issue of earthquakes arises.

"There's certainly potential for earthquakes in this region," said Anne Sheehan, a seismologist at the University of Colorado at Boulder who co-authored the new study. "They would be very low-probability events but, like all earthquakes, they could have large consequences if they do happen."

Not dead, but not thriving

Sheehan began studying the region after noticing something odd in the mantle underlying the Rio Grande Rift. Studies had shown that seismic waves move through this part of the mantle very slowly, hinting that it could be quite hot. It could also mean that the overlying continental crust is spreading apart, Sheehan thought.

Using a large network of GPS stations — nearly 300 sites — her team monitored the rift's movement over four years. They found that the rift is in fact spreading very slowly, at a rate of about 0.1 millimeters per year.

"That's really pretty small," Sheehan told OurAmazingPlanet. "The rift is not dead, but it's not really thriving either."

More surprisingly, the team found that the spreading isn't focused at the rift itself, but is spread across a span of more than 370 miles (600 kilometers).

"That wasn't what we expected, because the deformation at the surface has been along faults that are relatively narrow," said Henry Berglund, a geophysicist at UNAVCO who led the study. "Instead we observed the deformation is likely much broader than that — at least the width of the state of New Mexico." [What's the Most Earthquake-Prone State in the US?]

As for earthquake risks, Berglund explained, "It's not a predictive tool, but it does tell us that, if the deformation is broader, maybe we're more likely to have earthquakes in more places than we previously expected.”

There was a magnitude-5.3 quake near Trinidad, Colo., last August, and a larger earthquake with an estimated magnitude of 6.6 in north-central Colorado in 1882. A magnitude-5.5 quake shook Dulce, N.M., in 1966. Future quakes in the region could also fall in the magnitude-5 or -6 range, but likely not much higher, Sheehan said.

"We can't use this to say we expect to see a big earthquake anywhere in the region," Sheehan cautioned. "But a more worrisome aspect is that we don't really expect earthquakes here, so our building codes aren't as strict as they are in, say, California."

The team's findings appear in the January issue of the journal Geology.