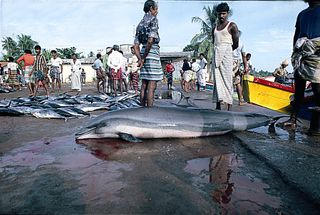 Obscure species such as Fraser’s dolphin (seen here in a fishing market in Sri Lanka) are being increasingly utilized as food in areas impacted by food insecurity and/or poverty.
(Image: © AnoukIlangakoon)

Fillet of dolphin? Polar bear steak? As world population increases, people in coastal poverty-stricken areas are turning to the ocean for their meals, consuming marine mammals such as dolphins and seals, new research suggests.

Since 1990, at least 87 species of marine mammals — including dolphins, porpoises and manatees — have been served up in 114 countries. They are the victims of hunting and even commercial fishing operations, where they are sometimes caught accidentally, the researchers said.

The fishing of larger marine mammals, like humpback whales, is strictly regulated and monitored; but the extent to which these smaller warm-blooded marine species, including dolphins and seals, are caught, killed and eaten has been largely unstudied and unmonitored.

"International regulatory bodies exist to gauge the status of whale populations and regulate the hunting of these giants," study researcher Martin Robards, of the Wildlife Conservation Society, said in a statement. "These species, however, represent only a fraction of the world's diversity of marine mammals, many of which are being accidentally netted, trapped, and — in some instances — directly hunted without any means of tracking as to whether these off-takes are sustainable."

Porpoise and narwhal on the menu

To get a clearer picture of the problem, the Wildlife Conservation Society and Okapi Wildlife Associates examined records on small fisheries focused on small whales (like pilot whales), dolphins and porpoises from 1975 and records of global marine mammal catches between 1966 and 1975.

From there, the researchers consulted about 900 other sources, including reports and discussions with numerous researchers and environmental managers; the exhaustive investigation took three years to complete.

They found that since 1990, people in at least 114 countries have consumed one or more of at least 87 marine mammal species.The list includes species people might not know by name or sight, such as the pygmy beaked whale, South Asian river dolphin, narwhal, Chilean dolphin, long-finned pilot whale and Burmeister's porpoise. The list also includes well-known species, such as bottlenose dolphins, seals, sea lions (including the California sea lion), polar bears and three species of manatees. [Gallery: Polar Bears Swimming in the Arctic]

Some of these species, like the manatee's close relative the dugong, are considered a delicacy in some parts of the world, making them targets of human consumption.

Since the 1970s, humans' taste for these warm-blooded aquatic animals has apparently been on the rise, the researchers found, especially incoastal areas and estuaries (where rivers meet oceans). This could be due, in part, to changes in fishing techniques in those areas, where these marine mammals are caught as "bycatch" in nets meant for other fish.

In areas such as the Congo, Gabon and Madagascar, these marine mammals serve as supplementary sources of dietary protein, similar to the animals in the forests that are taken by hunters and locals as bushmeat. As the world's population continues to increase, so does its food needs. The Wildlife Conservation Society is working with fishermen in these areas to reduce the need to catch wild marine mammals, and instead hunt sustainable fish.

The researchers say that increased awareness of the problem and increased monitoring are needed to prevent the destruction of marine life.

"There is a need for improved monitoring of species such as Atlantic and Indo-Pacific humpback dolphins," Howard Rosenbaum, director of the Wildlife Conservation Society's Ocean Giants Program, said in a statement. "In more remote areas and a number of countries, a greater immediate need is to understand the motivations behind the consumption of marine mammals and use these insights to develop solutions to protect these iconic species."

The study was published Jan. 24 in the journal Biological Conservation.