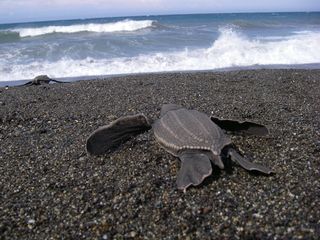 A baby leatherback turtle heads out to sea.
(Image: © NOAA.)

Important marine living quarters of the world's largest turtle, the endangered leatherback, recently got some new protections, thanks to a decision from the U.S. government.

The National Oceanic and Atmospheric Administration (NOAA) has designated roughly 42,000 square miles (108,800 square kilometers) of the Pacific Ocean off the coasts of California, Oregon and Washington as critical habitat for the largest marine reptiles on Earth, whose shells can reach  6.5 feet (2 meters) in length and weigh up to 1,190 pounds (540 kilograms).

The designation will not directly affect recreational fishing, boating and other private activities within the area, only federal projects that have the potential to adversely modify or destroy critical habitat, NOAA noted in a statement.

Two other areas are already designated critical habitats for leatherback turtles — along a beach on St. Croix, in the U.S. Virgin Islands, and another in adjacent Atlantic waters.

NOAA is designating this additional critical habitat in the Pacific Ocean as a result of an Endangered Species Act petition to revise the existing critical habitat for leatherbacks to include important habitat off the U.S. West Coast.

Once an Endangered Species Act petition is received, NOAA Fisheries must evaluate the petition and scientific information provided to determine if the petitioned action is warranted. If it is, the agency determines how to move forward.

The leatherback sea turtle has been listed as endangered since 1970. Leatherbacks have the largest range of any living reptile, and live throughout the world's oceans.

They feed primarily on jellyfish and lay their eggs on tropical and subtropical beaches.

Although very little is known about their lifespan, biologists estimate leatherbacks can live for 45 years or more.

Leatherbacks face many dangers, both in the marine environment and on land, including being caught in fishing gear, habitat destruction and the harvest of eggs and adults on nesting beaches.