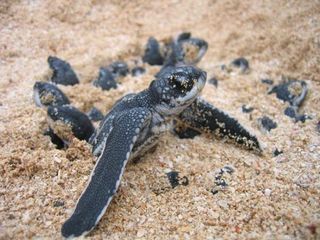 The endangered giants of the turtle world, massive leatherbacks, may be in the midst of a baby boom in the state of Florida, at least.

Over the past three decades, the number of leatherback turtle nests on 68 beaches across the Sunshine State has increased by roughly 10 percent every year, according to a new statistical analysis and model.

Some beaches posted annual increases of more than 16 percent, others saw increases as low as 3 percent.

The Florida turtle trend is mirrored among other Atlantic leatherback sea turtle populations and is "very encouraging news," said Larry B. Crowder, director of the Duke Center for Marine Conservation. "It suggests that conservation and recovery efforts mandated under the Endangered Species Act are paying off regionwide."

The growth has likely been fueled in part by improved monitoring and protection of nesting beaches over the last 30 years, Crowder says, but other factors may also be at work.

"Nesting is increasing even where beach protection has not been enhanced," Crowder said in a statement. "Changing ocean conditions linked to climate variability may be altering the marine food web and creating an environment that favors turtles by reducing the number of predators and increasing the abundance of prey, particularly jellyfish."

With plenty of jellyfish to munch on, breeding-age female leatherbacks may be able to build up fat reserves more quickly, allowing them to nest more frequently, said Kelly Stewart, lead author of the new study, published in the current issue of the journal Ecological Applications. Stewart, now a postdoctoral fellow with the National Oceanic and Atmospheric Administration, conducted her research while a postdoctoral fellow at Duke.

Reduced populations of large predators, including the collapse of shark populations in the northwest Atlantic over the past decade, may be playing an even larger role in the turtle boom by decreasing at-sea mortality rates for juvenile and young adult turtles, she said.

Despite being a small population scientists estimate fewer than 1,000 leatherbacks nest on Florida beaches the increases in nest counts there may help achieve objectives of the federal Endangered Species Act-mandated recovery plan, Stewart said.

However, news for leatherback populations elsewhere is not so encouraging. Populations have plummeted at nesting beaches along Mexico and Costa Rica's Pacific coasts, which once hosted thousands of female leatherbacks each year. Local extinction of the species may be imminent on those beaches.

Nest counts are the most reliable way of assessing trends in sea turtle populations because leatherbacks spend most of their lives in the open ocean. Only the females ever return to land, and only to lay their eggs.