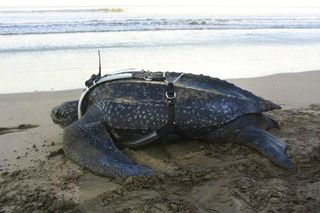 A leatherback turtle makes its way back to the sea at Playa Grande, Costa Rica with the harness and tracking device strapped on.
(Image: © George Shillinger.)

Leatherbacks are the Olympians of the turtle world. They swim farther, dive deeper and venture into colder waters than any other marine turtle species.

Despite their toughness, leatherbacks are critically endangered. In the eastern Pacific Ocean, the leatherback population has dropped a staggering 90 percent in roughly two decades, largely due to human interference.

Now, new satellite data from a 5-year-long project tagging and tracking the turtles are providing insights into their behavior, and scientists hope the information will help keep the giant turtles out of harm's way and give their numbers a chance to rebound.

"By taking the data we've gathered on their movements and integrating it with data on the surrounding oceanographic conditions, we've been able to identify what kind of habitats the leatherbacks prefer," said project leader George Shillinger, a Stanford University biologist.

"This information is helping us develop models to predict where they might go and when they might show up there."

Until now, researchers didn't know why the leatherbacks that nest at Playa Grande in Costa Rica linger for months at a time in the South Pacific Gyre, a vast region of the Pacific between South America and New Zealand that appears to be an ocean desert, largely devoid of nutrients.

The data that came back from the tagged turtles suggest the gyre actually may be rife with jellyfish, the main staple of the leatherback diet.

"We saw a distinct reduction in the swimming speed of the turtles as they entered the South Pacific Gyre," Shillinger said. "They were making more turns, diving more frequently and diving deeper. All those things suggest feeding behavior."

Another piece of evidence was the timing of the turtles' dives. Like many marine organisms, jellyfish appear to engage in daily vertical migrations , moving up into shallower depths at night.

The turtles' dives mirrored those movements, with their nighttime dives averaging about half as deep as the average daytime dives.

The research team also tracked the longest leatherback dive ever recorded, about 84 minutes. The researchers' findings will be detailed in an upcoming paper in the journal Marine Ecology Progress Series.

Overall, Shillinger said, the leatherbacks showed an affinity for areas with cooler sea surface temperatures and stronger upwellings of deep, cool, nutrient-rich water, which drives in an abundance of life, including prey.

"Understanding what sort of areas leatherbacks are likely to favor is a critical first step in protecting them in the open ocean," Shillinger said.