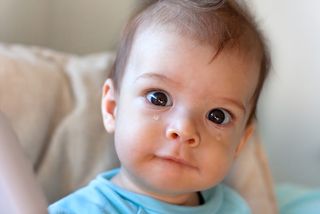 Teardrops keep our eyes safe from bacteria, and now researchers figure out how proteins in tears chomp away at invading bacteria.
(Image: © AjFile | Shutterstock)

Teardrops hold more than painful tales: Disease-fighting proteins also hide out in them. Long puzzled by the specifics of how the proteins in these weepy droplets destroy dangerous bacteria, scientists have finally figured out their secret: The proteins, known as lysozymes, have jawlike structures that latch onto bacterial cell walls and chomp through rows of them as if devouring an ear of corn.

"The enzyme grabs onto the walls of the bacteria and it doesn't let go; it starts chewing and it doesn't let up," study researcher Gregory Weiss, a molecular biologist and chemistry professor at the University of California, Irvine, told LiveScience. "It's basically scissoring all the way across the wall of bacteria."

Nobel laureate Alexander Fleming first discovered these antiseptic proteins in teardrops about a century ago. While scientists have known the proteins devour their opponents' cell walls, they weren't sure exactly how the process worked — for instance, Weiss said, did the protein "jump on and take a bite and then jump off"?

In the end, the scissoring process can wipe out bacteria far larger than the itsy bitsy proteins, keeping our eyes safe from any microbe that falls in. [The Physics of Teardrops]

A team led by Weiss and Philip Collins, an associate professor of physics and astronomy at Irvine, created a tiny transistor to try to solve the mystery. They glued individual lysozymes onto a carbon nanotube attached to an electronic circuit. When electricity was sent through it, the nanotube formed a teensy microphone, about 100,000 times smaller than a human hair, that could listen in on the protein's chomping. Weiss compared it to listening very closely to an engine revving and being able to estimate various factors about the car's speed.

They uncovered two of the protein's secrets: "As it's moving along the surface [of the bacteria], it's taking bites and those bites are coupled with its motion," Weiss said. "And each bite results in a new tiny hole, and eventually you get this big gash, this big wound, and the bacteria explode."

In the course of the relentless chomping, each bite seems to have a special cadence. The protein uses one step to open its mouth and two steps to close it.

Next, the team will try out other proteins on their nano-microphone, hoping eventually to use the device for cancer detection and drug discovery, Weiss said.

"If we can detect single molecules associated with cancer, then that means we'd be able to detect it very, very early," Weiss said in a statement. "That would be very exciting, because we know that if we treat cancer early, it will be much more successful, patients will be cured much faster, and costs will be much less."

The research, supported by the National Cancer Institute, is detailed in the Jan. 20 issue of the journal Science.